The Taming of the Smokey Reviewed by Lima on Sunday, August 02, 2015 Rating: 5
Cats Fostering Lifestyle

The Taming of the Smokey

Those of you who follow my Instagram, will have no doubt noticed my feed being swamped with photos of an impossibly cute little grey ki... 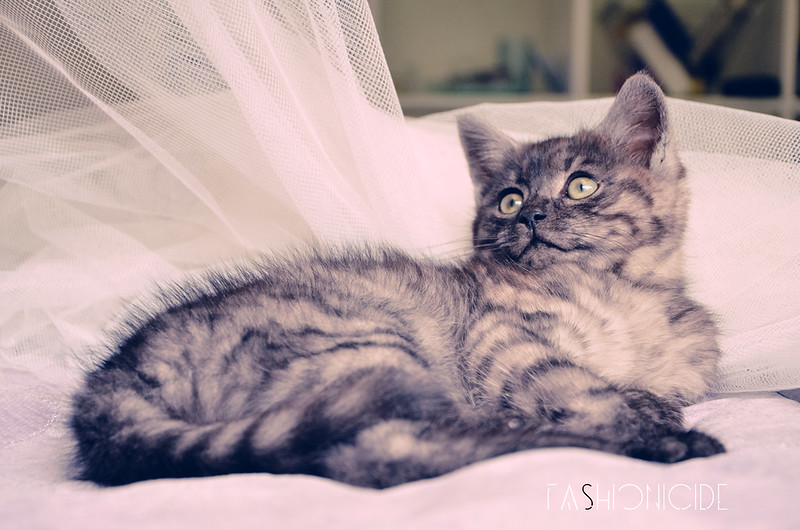 Those of you who follow my Instagram, will have no doubt noticed my feed being swamped with photos of an impossibly cute little grey kitten with the most incredible markings. Smokey was mine for just a couple of weeks after we took him into 'foster' care, but he made such a big impact on my life!

The reason we took him on is all down to my mum actually, or at least my mum's cat. Her name's Fluffy - the cat, not my mum - and she's a Norwegian Forest cat. She's a beautiful cat with thick, longish white and grey fur that's so soft and silky. Outdoors she displays all the characteristics of a wild cat, hunting, fighting and controlling her little territory but indoors she is supremely tame, the contrast is quite startling. 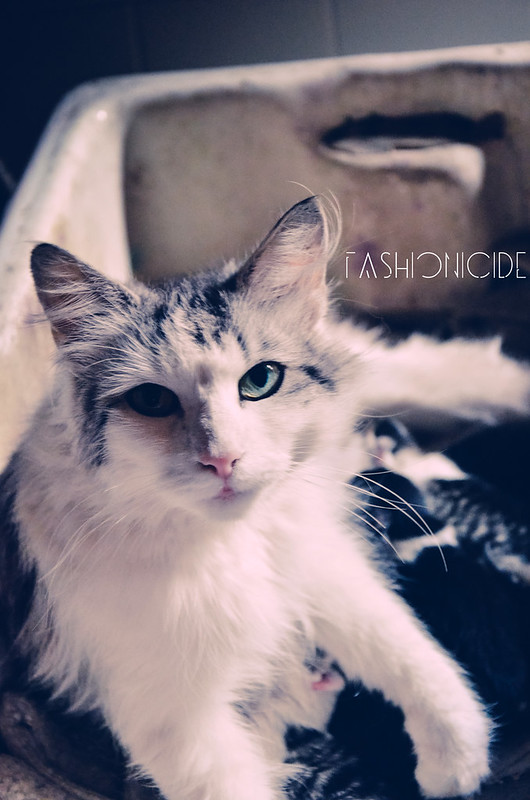 Anyway, Fluffy keeps getting pregnant and having her litters away from the house. This is obviously terrible for the kittens, as they'll be devoid of any kind of human contact in their formative weeks and will turn out pretty wild, living the streets as strays. Smokey was one of those kittens born outdoors in the streets, but on one particular day, Fluffy brought him back to my mum's house at about 6 weeks, probably to eat some of the catfood they put out.

By chance, my sister was at the window and noticed the little grey ball of fluff and quickly tried grabbing him. She eventually caught him, but he was absolutely terrified of her and made a good stab at avoiding capture. He was running around all over the place, hissing, growling and hiding. It was obvious he'd had no human contact at all and would turn out to be just another stray roaming the alleyways of my mum's neighbourhood.

Their neighbourhood already has a big problem with strays as it is, people take on kittens, dump them when they grow up and 'cease' to be cute enough to feed. My mum has taken in all manner of these strays in the past, so never a day went past in my childhood where there wasn't a cat in the house which definitely explains why I love them so much. There were times when she'd set her alarm at 4am to bottle-feed kittens that had been separated from their mother and just abandoned on our street, neighbours always seemed to bring news of stray cats to my mum first!

Now my mum has a new problem with Fluffy, where people know that Norwegian Forest Cats are rare(ish) and expensive, so they always feed her chicken, fish, lamb and all sorts of various bits of animal in an attempt to lure her in. Fortunately she's too clever to fall for that, but they also target her kittens. Her kittens are always beautiful. Smokey had his amazing markings, but another that does roam the streets still is called Poochie, and is wild beyond saving. Which is a great shame, as he's pure white with heterochromia - one eye is emerald and the other is azure blue - I almost died of cute overdose when I first saw him! 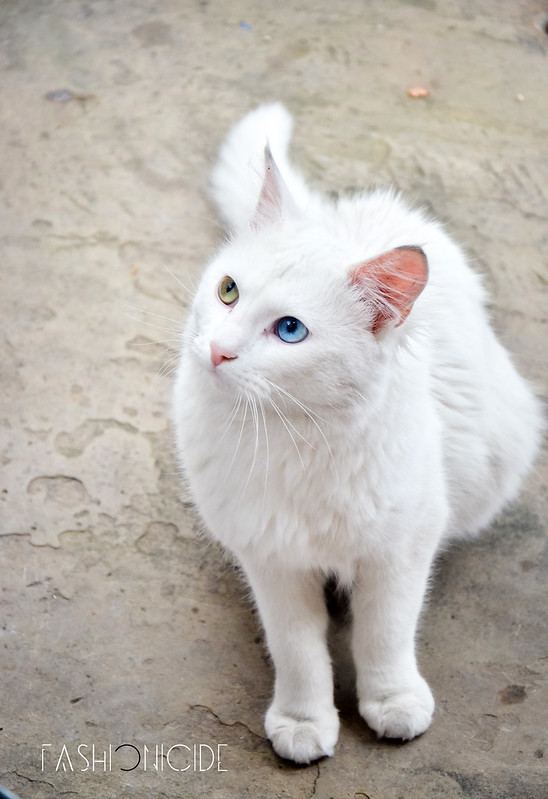 Poochie: he of the Heterochromia

So, my mum didn't want Smokey to become just another stray cat, and my sister wasn't having much joy in trying to tame him. So, knowing I have three tame cats of my own, asked me if I'd try to tame him, and give him away to a better home where he'll be looked after. I didn't really want to, as I knew that two of my cats would hate him, but when I looked at his little face, I just couldn't say no! 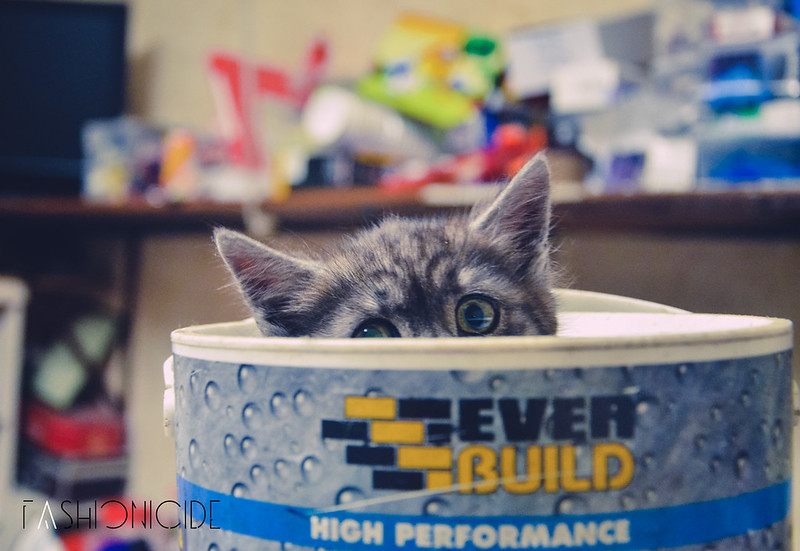 Could you say no to that little face? 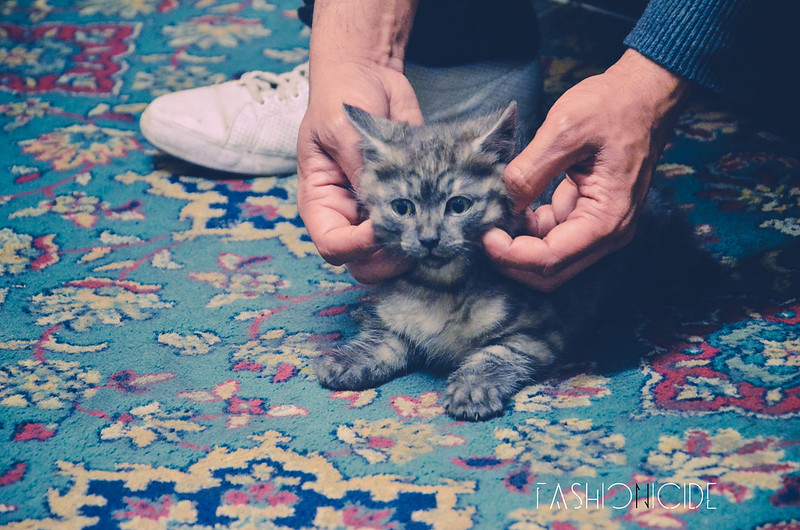 We we took him back to our house, and lo and behold, Alisa and Willie both hated him immediately. They wouldn't even come into the house by their own volition for the first week of him being here! The other half looked out of the bedroom window and noticed them both curled up, sleeping on the grass in the pouring rain because they just didn't want to come indoors.

Girl loved him though, she loves everyone as she's lost a lot of her cat instincts. She gets on with a lot of the cats in the area as she isn't threatened by them in anyway, and she poses no threat to them either! Smokey didn't seem to enjoy living with us at first, still acting a little wild whenever we approached him. He'd hiss, growl, hide and then run off. He did get quite attached to Girl very quickly, and I think she actually taught him how to be a cat. He'd never drank water before, only milk, so when he first saw the water bowl, he just walked straight in to it! 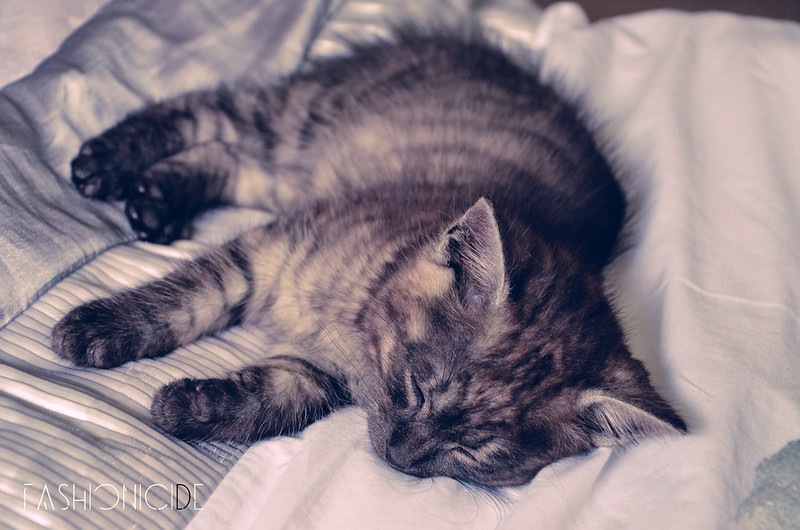 He poses, even while he sleeps 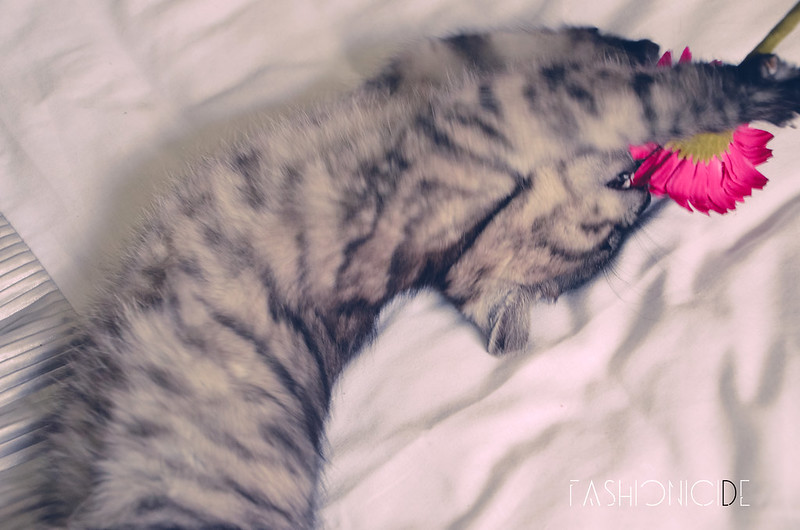 At full stretch - look at those markings!

After a couple of days spent with Girl, and us picking him up and stroking him occasionally, he began to settle down a bit and enjoy himself. He'd still hiss, growl and run off, but he was doing it much less often. He began to respond to his name for the first time and to purr for the first time too - he sounded like a little machine! After that first week, even though he'd improved, he still wasn't quite ready for rehoming. He was still in his shell a little and still a bit afraid of us, so we kept him on for another week. 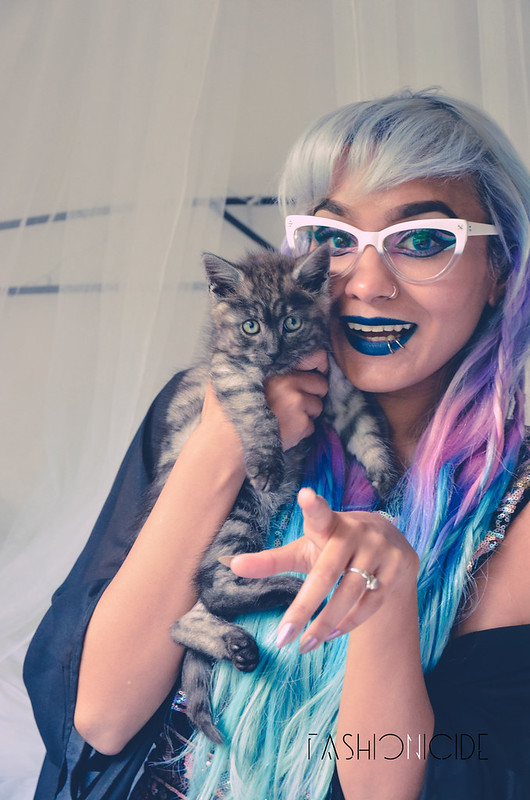 One is impossibly good looking, the other's wearing a nice pair of glasses 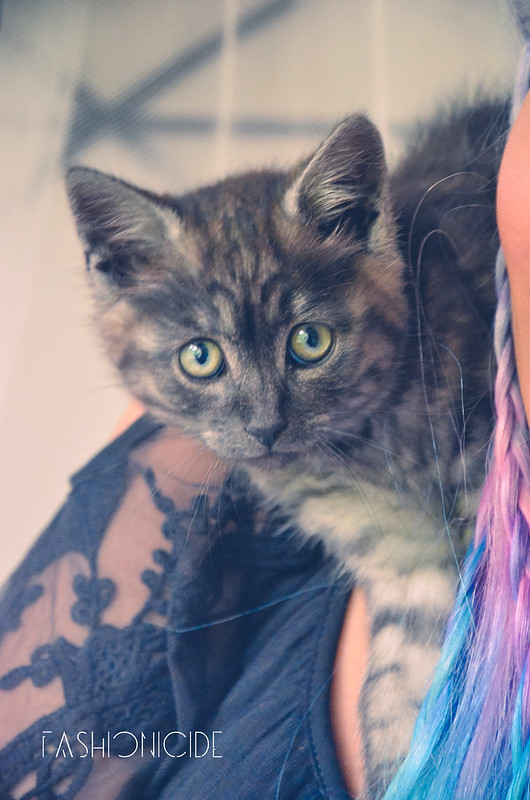 By the end of week two, he was sleeping on our bed at night, waking us up in the morning and just generally acting like a domesticated cat would. But most importantly he'd came out of his shell too and was beginning to get really playful, to the point of being a cheeky little sh*t! He was starting to crave attention, playfight with Girl and even try to engage in such tomfoolery with Willie and Alisa, though they'd both give him a loud hiss and a swipe.

He had the most adorable trait, something I'd never seen in a cat. Whenever we'd approach him to stroke him, he'd let us for a few seconds, before literally collapsing to the floor so that we could stroke his belly! I was telling my sister about this, and apparently Fluffy and a lot of her kittens share this trait. Maybe it's a Norwegian Forest Cat thing? Either way, it was seriously cute and hilarious! 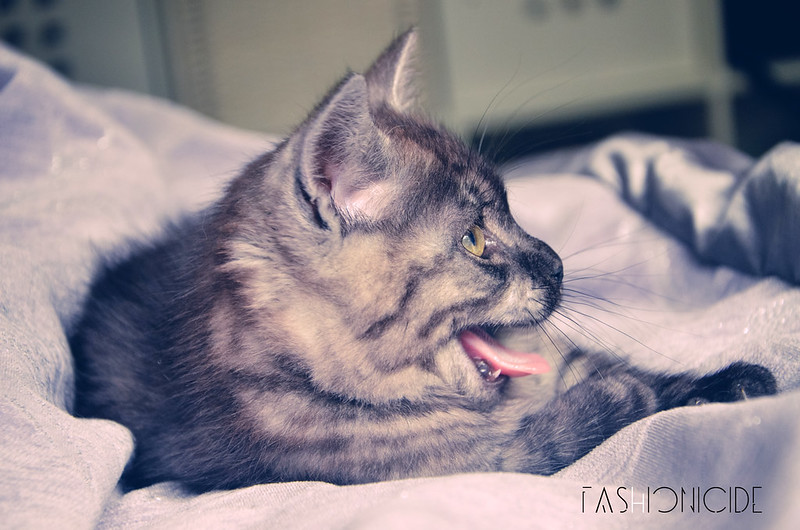 Sun's out, tongues out 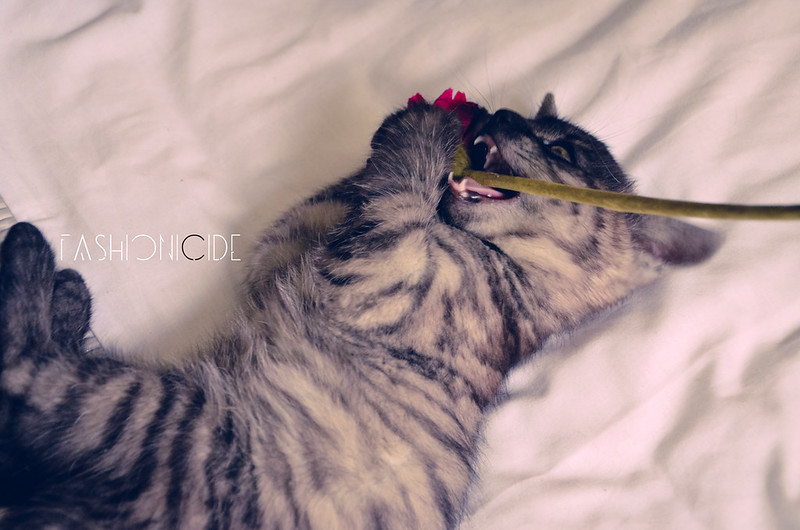 By now, the boy was ready for rehoming. But was I ready for him to be rehomed? No chance. He was like a part of our little family already, but I couldn't keep him as my cats were so clearly unhappy and just not getting used to him at all. He had to go, but we were determined to make sure he went to a serious cat person. We listed him on Gumtree with a bit of a price-tag, to filter out all of the timewasters and anyone who might fancy getting a kitten on a whim. It worked, as the woman who eventually took him travelled from Leeds to pick him up.

When he left, I actually cried. I loved the little guy to bits and was devastated to see him go. The house felt a little empty and lot more boring without him running around all over the place, as kittens do when they're beginning to discover what they can and can't do. As great as it was, I promised myself I'd never do it again, it was just too painful to have to give him away at the end of it all. 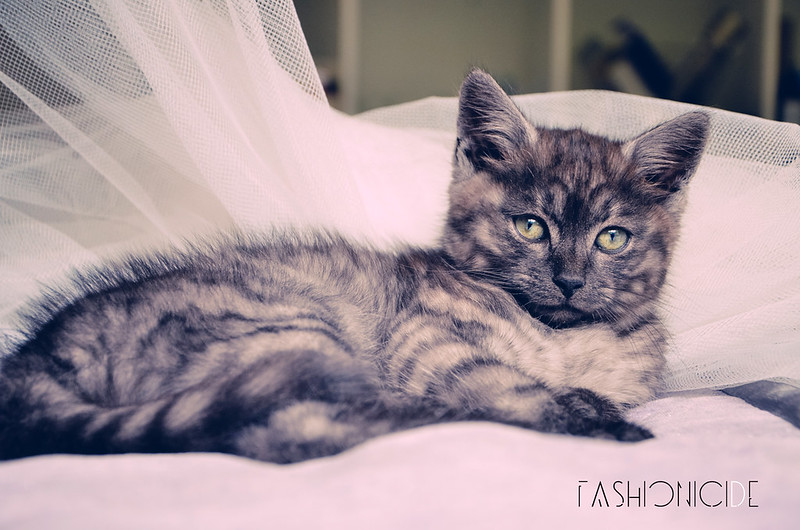 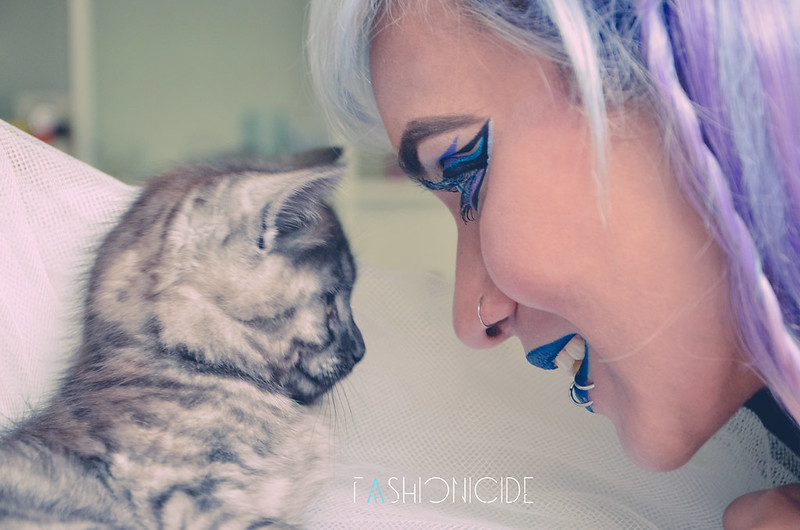 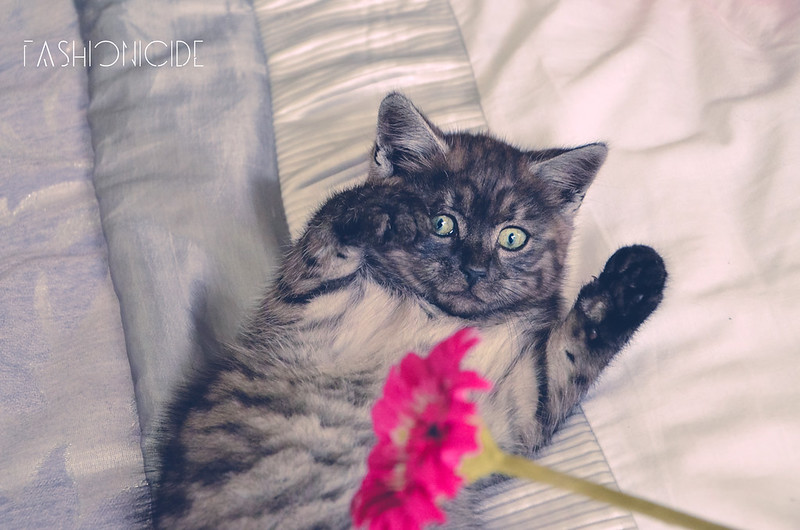 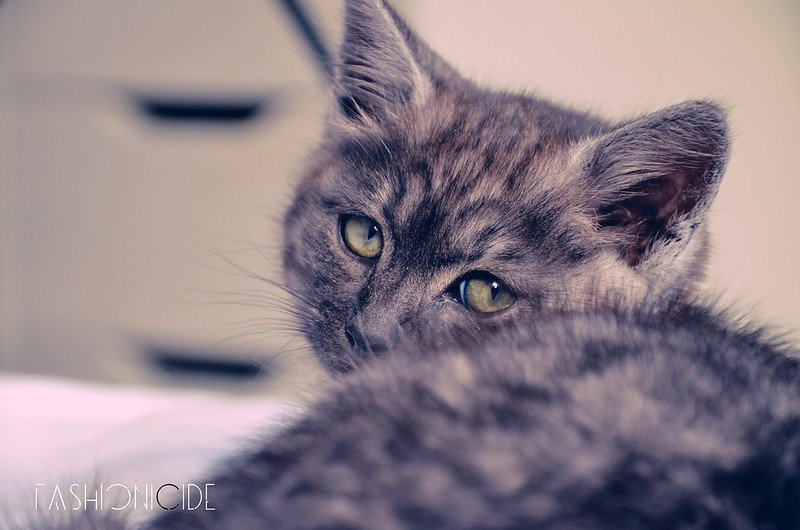 One for the portfolio 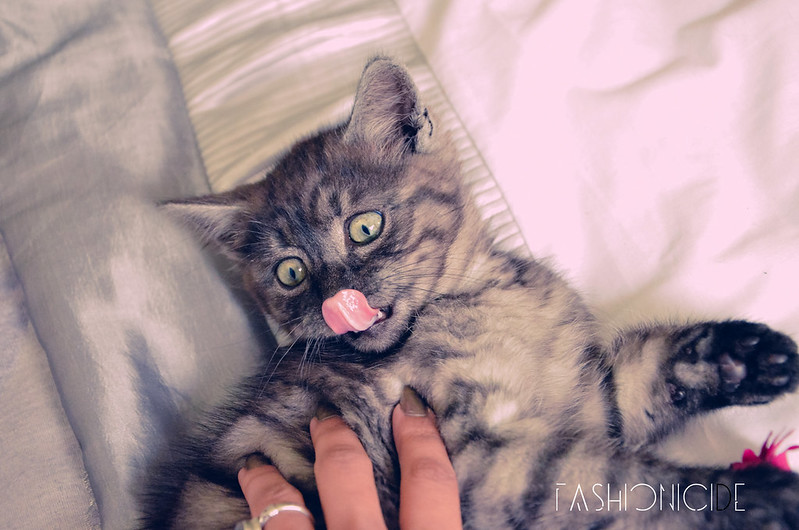 Mmm you look so tasty... 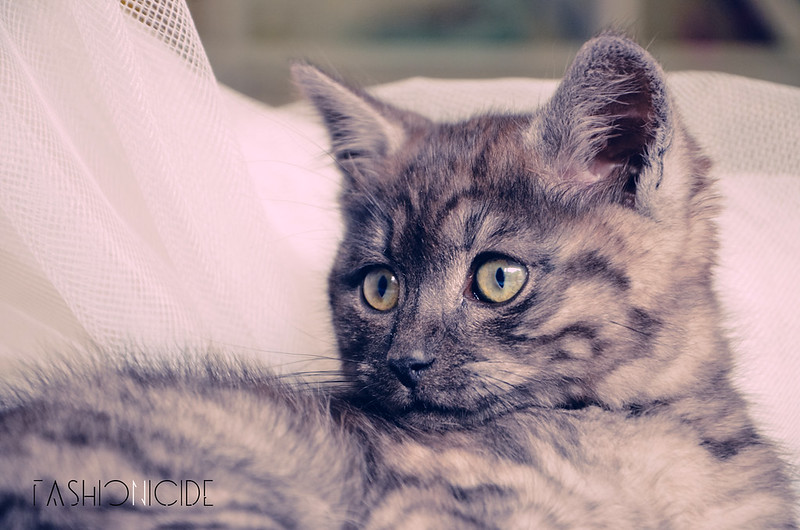 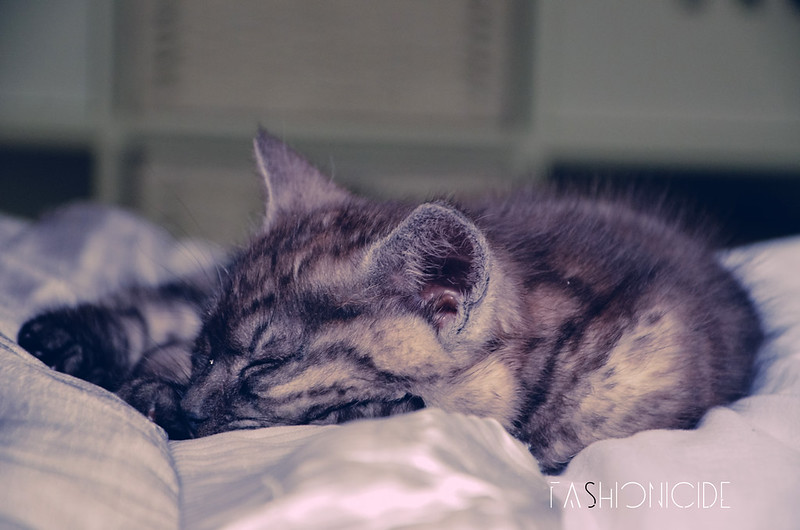 It's been a long day 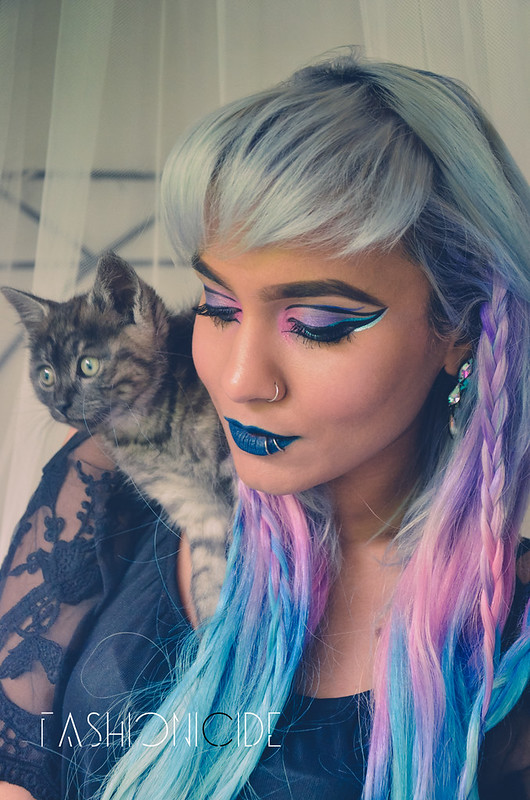 No sooner had I gotten over it though, I was back at the parents' for Eid and Fluffy gave birth to another brood of kittens. This time, there are 6. My mum shot me that look that only mothers can, which basically said: "You take some of them."