Lime Crime are one of my all time favourite makeup brands, but having a quick browse through the blog, they're also a brand that I ... 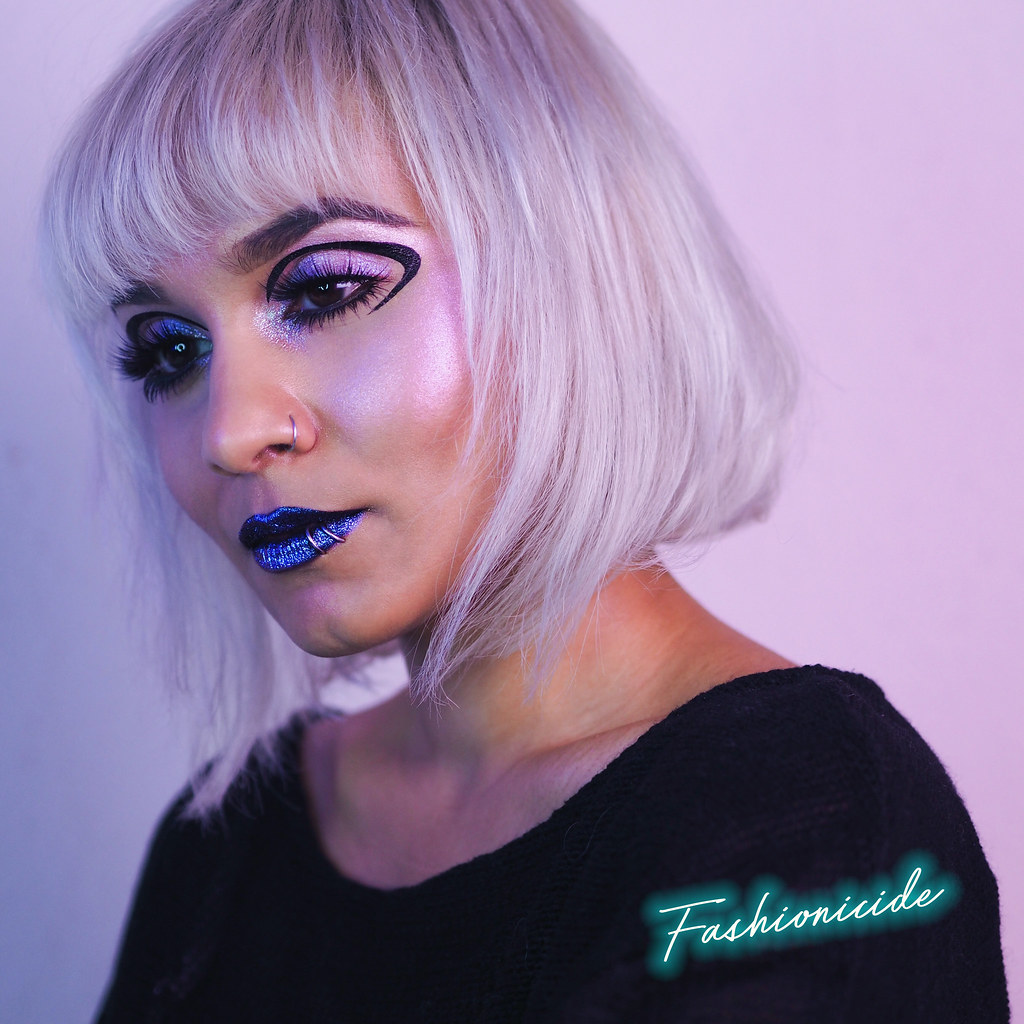 Lime Crime are one of my all time favourite makeup brands, but having a quick browse through the blog, they're also a brand that I haven't reviewed all too often. So, today, I'm rectifying that, and who knows, maybe there'll be a few more reviews on the way shortly..

So why are they one of my favourite brands then? Well, I like innovation, I like brands that try do to things a little differently and above all, I like brands that bring a little bit of colour to dressing tables. As far as I'm aware, their Velvetines were amongst the first liquid lipsticks on the market, and they've proven to be so popular, that the range seems to be expanding so much, I can't keep up. They really speak to me though, because the range doesn't just comprise of the standard browns, nudes and reds, they've also made their name by venturing towards the unconventional, like blacks and pastel blues.

Even more excitingly, last year they unleashed a new type of lipstick upon the world, in the form of their Diamond Crushers lip toppers, which kinda resemble.. crushed diamonds, and have now become a staple of my makeup routine. Away from the lips though, they've also launched their own highlighters, with three shades in a palette, as well as Diamond Dew, which is similar to Diamond Crushers, but is suitable for use around the eyes - they deserve a post of their own though! 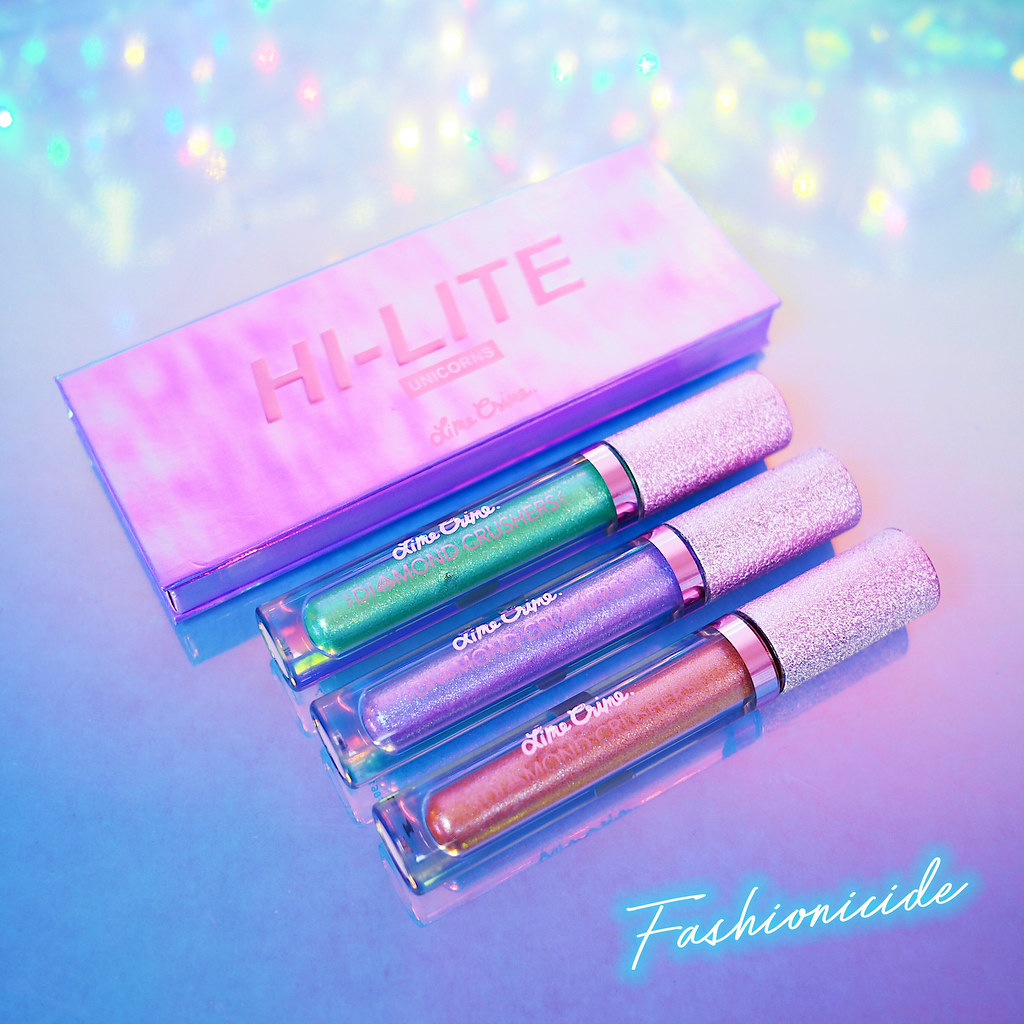 So, enough of the Lime Crime love-in, and back to this post. Last month, I purchased the Unicorn Queen Collection from Lime Crime, which consists of their Hi-Lite palette (three guesses what it is) named 'Unicorn' and three Diamond Crushers in the shades 'Over The Rainbow', 'Meadow' and 'Unicorn Queen'. 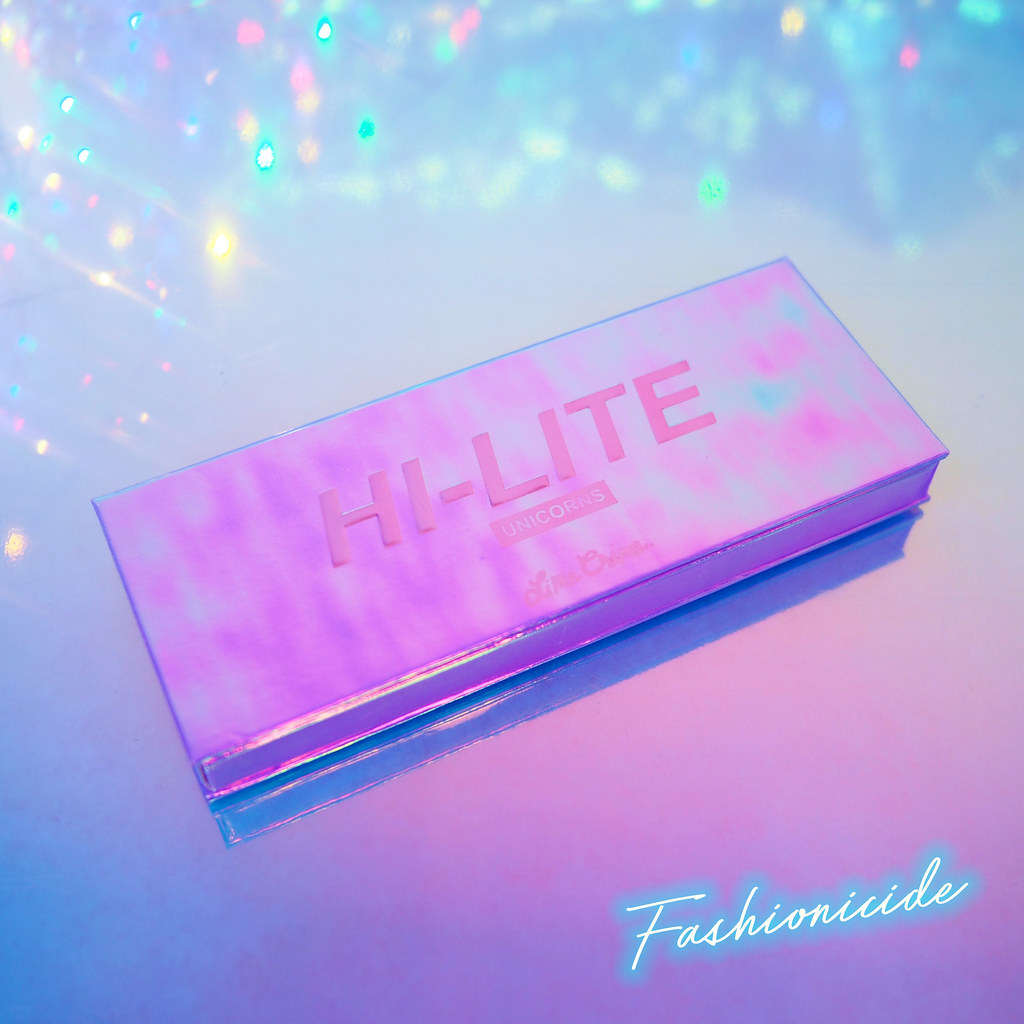 I'm gonna start off with the Unicorn Hi-Lite palette though, and I've used a Lime Crime Hi-Lite palette before, called Opals, which contained a series of pearlescent shades that really impressed me. The highlighter was smooth, not chalky, and of course gave that fire emoji glow we're all looking for. This palette, however, is different. And I don't just mean the shades, but the formula too. More on that later, but first of all, I'm gonna tell you all about the shades: 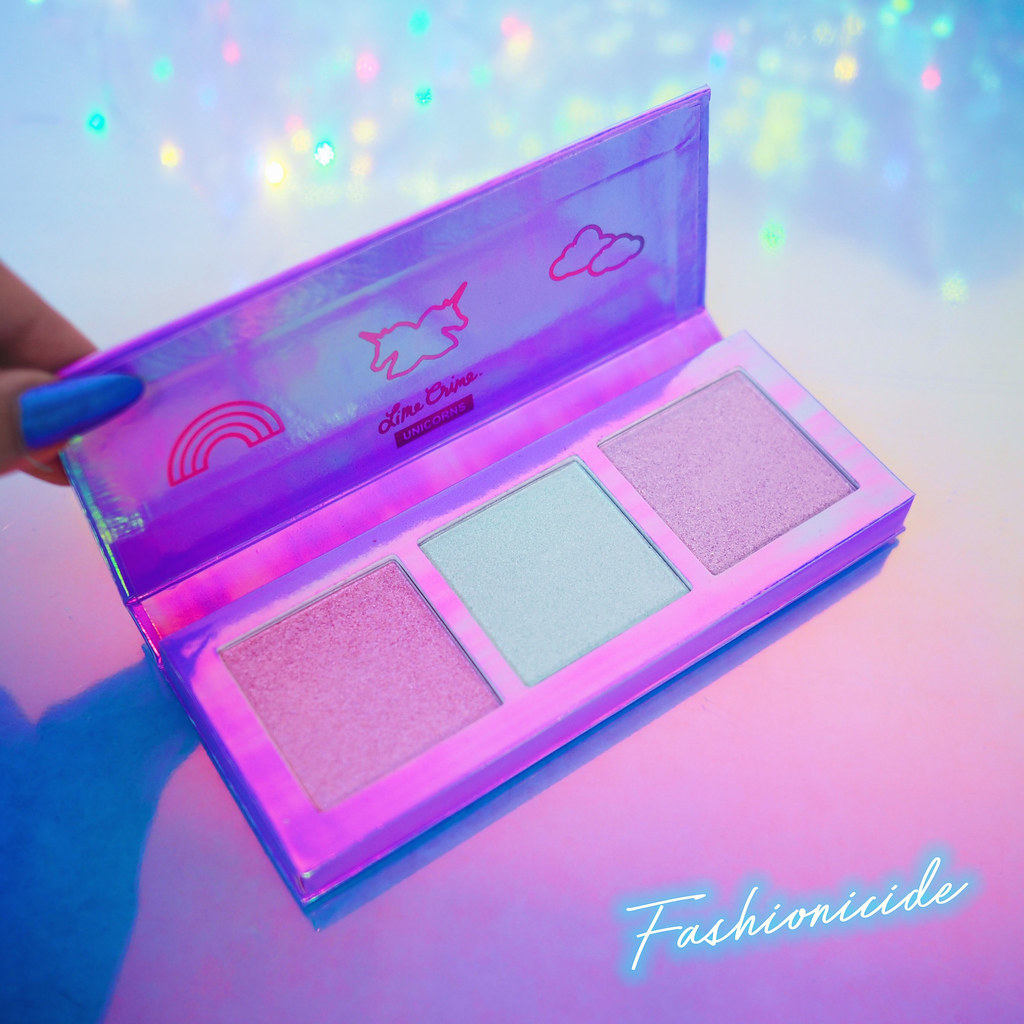 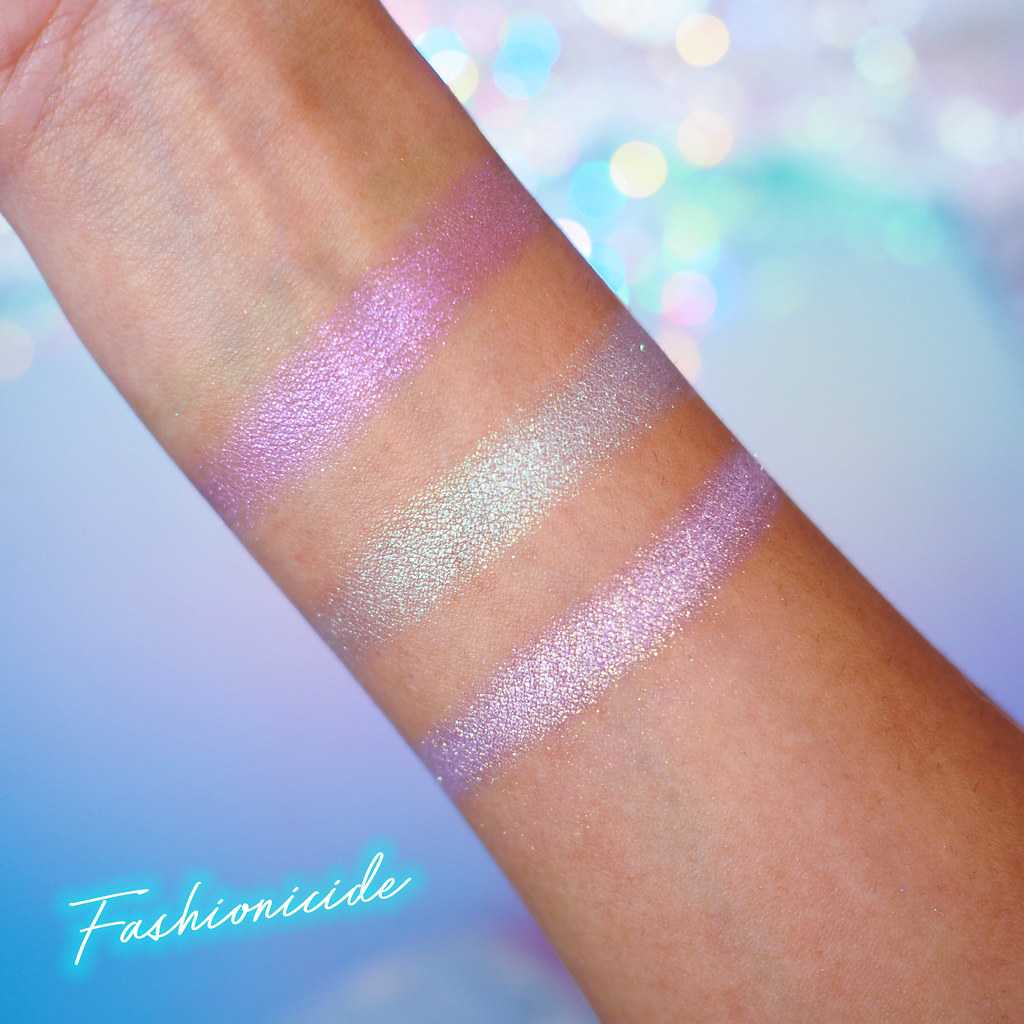 
So we've got Happyland, Frolic and Daydreamin'. Lime Crime describe Happyland as an electric pink, and to me this is accurate. Whenever I see it, or wear it, it always make me think of that pink neon light aesthetic. Frolic is described as a green shade - no shit, sherlock - which is obviously accurate, but I think it's a kind of pastelly mint shade, reminiscent of NYX's Prismatic shadow in Mermaid - which of course, I've used as a highligher in the past. Last but certainly not least is Daydreamin', which is described as a Mauve-gold. Again, spot on with the descriptions, it's a rusty gold that errs on the side of bronze.


The formula is every bit as smooth as the Opals, but it's a little bit glittery too - which I'm totally ok with. Also, they don't shy away from the fact that it does contain glitter, stating as such on their website. But the reason why it works with this palette, is that the glitter is consistent as you apply it - you won't find big patches of glitter, or big patches without - and it's smooth, giving off a nice shiny, reflective finish, which is simply stunning!

The pigmentation is also impressive, you can definitely differentiate between the there shades and notice the tone of them when applied to the skin. Currently, I'm using Happyland much more than Frolic, because I'm vibing on pink at the moment, and as for Daydreaming', this is by far the most pigmented of the three, it's super shiny and gives a nice wet look to the skin. If you prefer your highlight to be subtle, I'd recommend applying a teensy, tiny amount, but if you're extra like me, you will LOVE this.


DIAMOND CRUSHERS - UNICORN QUEEN, MEADOW AND OVER THE RAINBOW 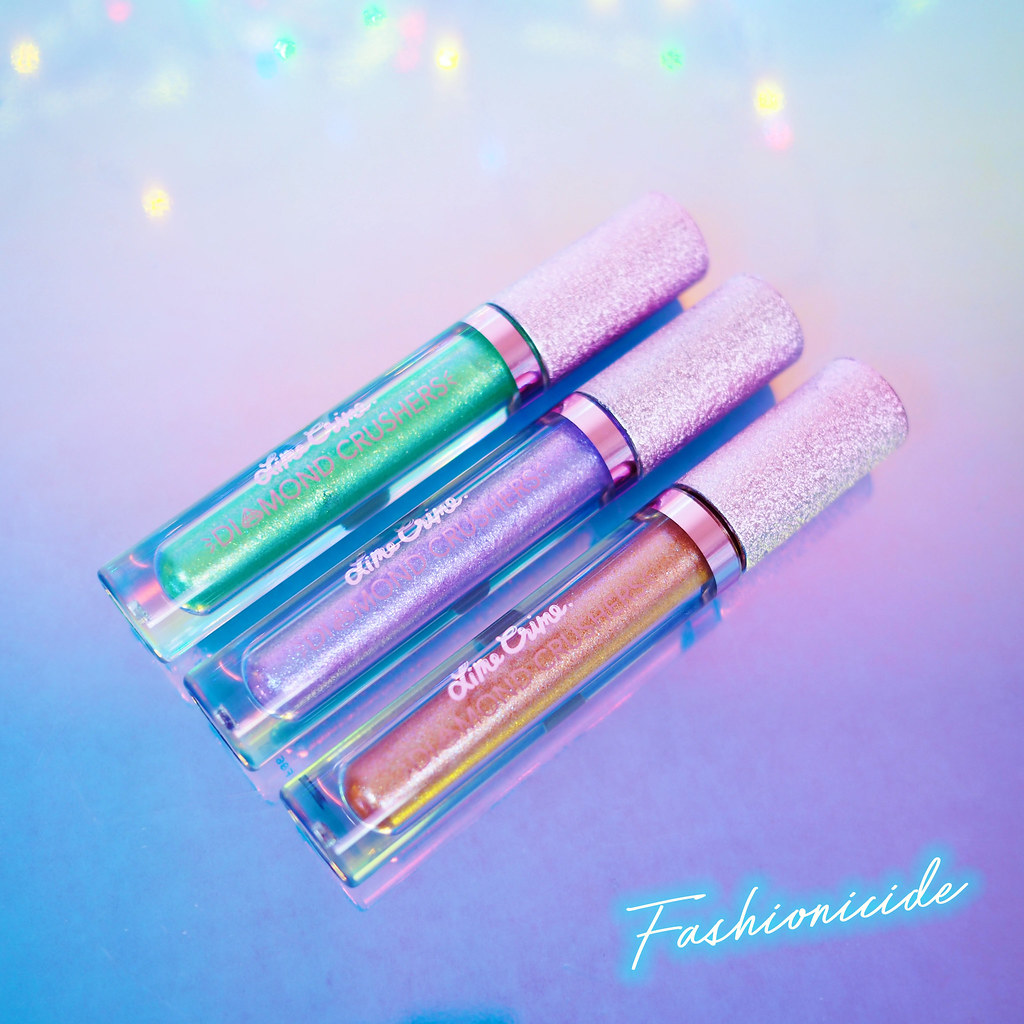 Confession time: I own most of the Diamond Crushers, and I'm not even ashamed. Although they're marketed as lip toppers, I feel that they're much more than that. They really ought to stop putting themselves down, and achieve their full potential! Lime Crime recommend you don't use them around the eyes, and I'm not entirely sure why, possibly the strawberry scent, but I've never had any issues using them on the inner corners or my eye lids.

The name is just perfect too, because when I try to describe how they look on the lips, all I can come up with the obvious 'crushed diamonds'. There just isn't really any other way to describe them! If I was forced to try, I'd say that it doesn't look like glitter, it looks like solid chromatic shine. If you look really closely, it looks like tiny microscopic flakes give it that ultra high shine reflective finish. Whatever it is, it's magical.


I know that Jouer have a lip topper of their own which is basically a gloss, but what makes Diamond Crushers so different is they're not actually glossy, remarkably for something so shiny, they dry down to a matte finish, and they stay put all day. 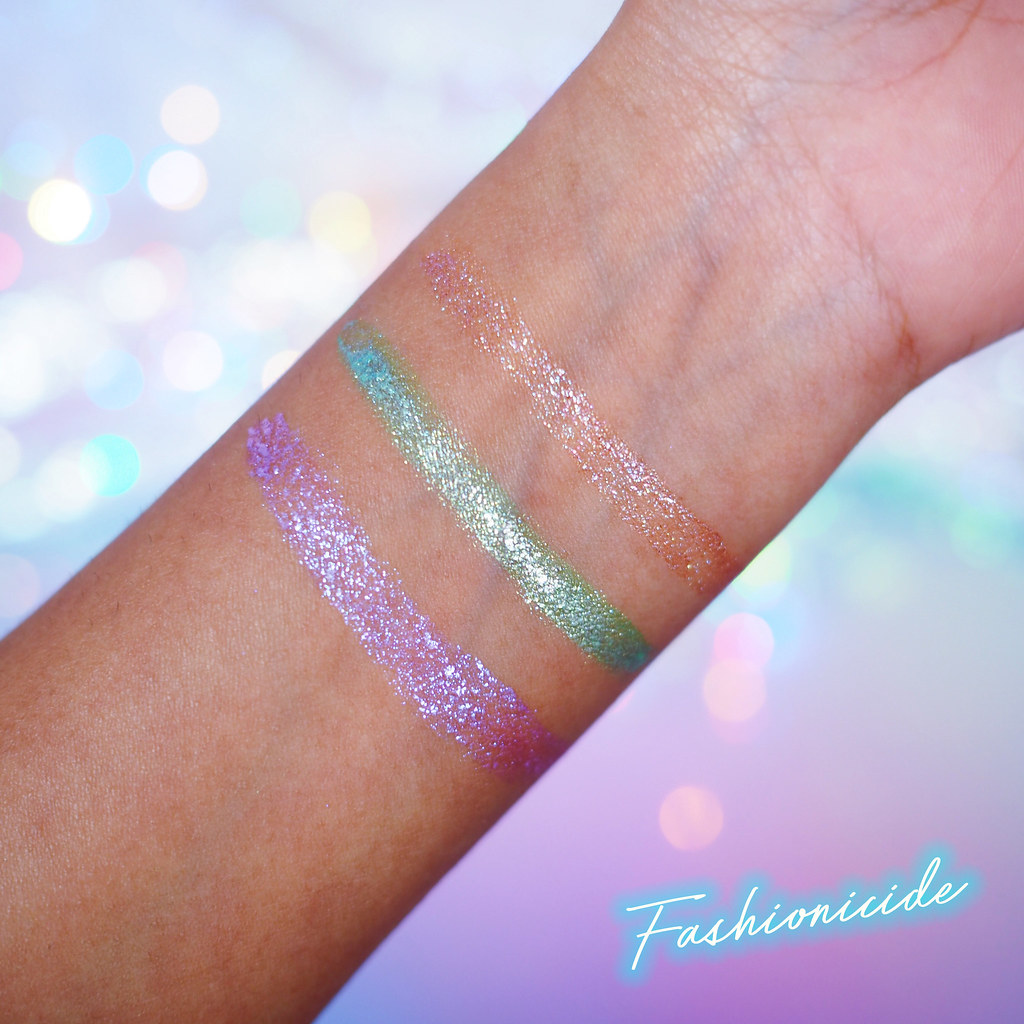 
Onto the Unicorn Queen Collection Diamond Crusher shades then, and we have the self-titled Unicorn Queen, described by Lime Crime as an electric violet (there's definitely a theme here!) It's lilac toned, with pink and blue flecks running right through it. For my look, I wore it over Black Velvet, and you can clearly see it looks much more blue-toned than purple. Either way, it looks pretty sensational. Meadow is describes as a Mint Green, but as you can see in the swatches, it looks a little more grassy than minty, but upon application, those mints shine through a bit more.

Last but not least, we have Over The Rainbow, which has the most paradoxical description ever, as they say it's a Rainbow Nude. This sounds like it either shouldn't exist, or shouldn't work but actually it does exist and wow it works! The overriding tones are in fact nude, but there's a lot of microscopic rainbow magic packed within. I wore this on my lids for the look below, and it's incredibly beautiful - it's one of those shades where the longer you look at it, the more your brain keeps telling you: "No, it's red. Wait, it's blue. ARGH, it's green! Or is it? I give up." It truly does look different every time you catch a glimpse of it, and under different lights. 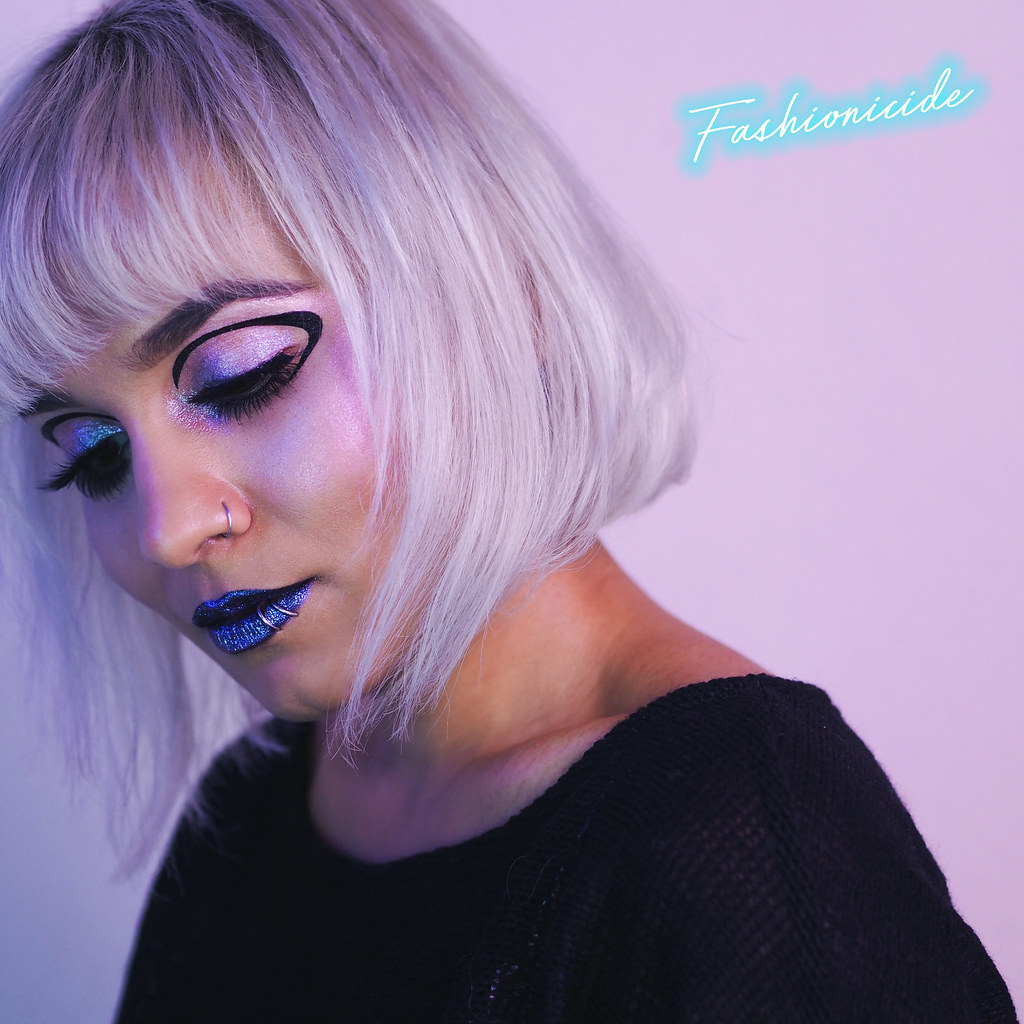 As noted above, I wore Unicorn Queen over Lime Crime's Black Velvet Velvetine, and as you can see it definitely looks more blue-toned than purple. I wasn't too bothered though, I just wanted it to look mind blowing, and it certainly is that. Also, you don't necessarily need to wear Diamond Crushers over lipstick, you could just wear them on their own if you fancy it.


For the highlight, I'm wearing Happyland for dat pinky, neon dreams vibe and applied Daydreamin' to the brow bones. Just look at that shine! 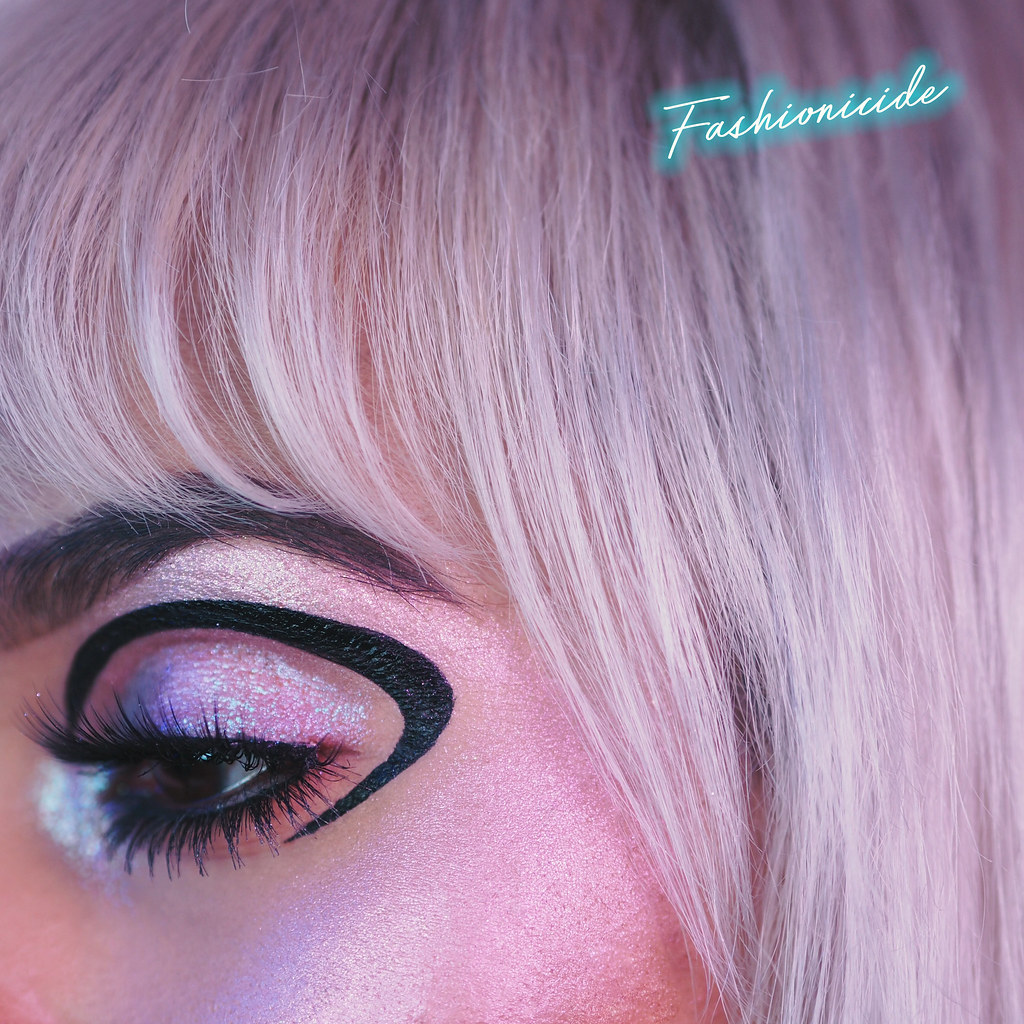 QUIZ TIME: Question 1 - what colours can you see on the lid? I get the feeling if you asked five different people, you may get five different sets of answers - how awesome is that? I've applied the 'Over the Rainbow' Diamond Crusher onto my bare eyelids, and on the inner corner I've gone with the 'Meadow' Diamond Crusher - you can totally spy those minty green tones. And of course, my extra highlighter is Happyland!


So there you have it! Oh, and Lime Crime have only gone and launched another bloody collection, this time called Angels, which is totally calling out my name with its ethereal shades. Seriously though Lime Crime, I've barely had time to get over the Unicorn Queen collection, take it easy with the releases please, I have bills to pay and a stomach to feed!

For those of you wondering where you can purchase Lime Crime products from, you can either buy it direct from their website - I've never been charged customs - but if you don't want to wait for it to be shipped out from the US, their UK stockists are Love Makup, Cult Beauty, ASOS and Beauty Bay.


The Unicorns Hi-Lite palette retails at £32.95 and each individual Diamond Crusher is priced at £13.95.