Up here in the North, or specifically Manchester, we're fed up of casting our glance southwards to London, seeing all of these amazin... 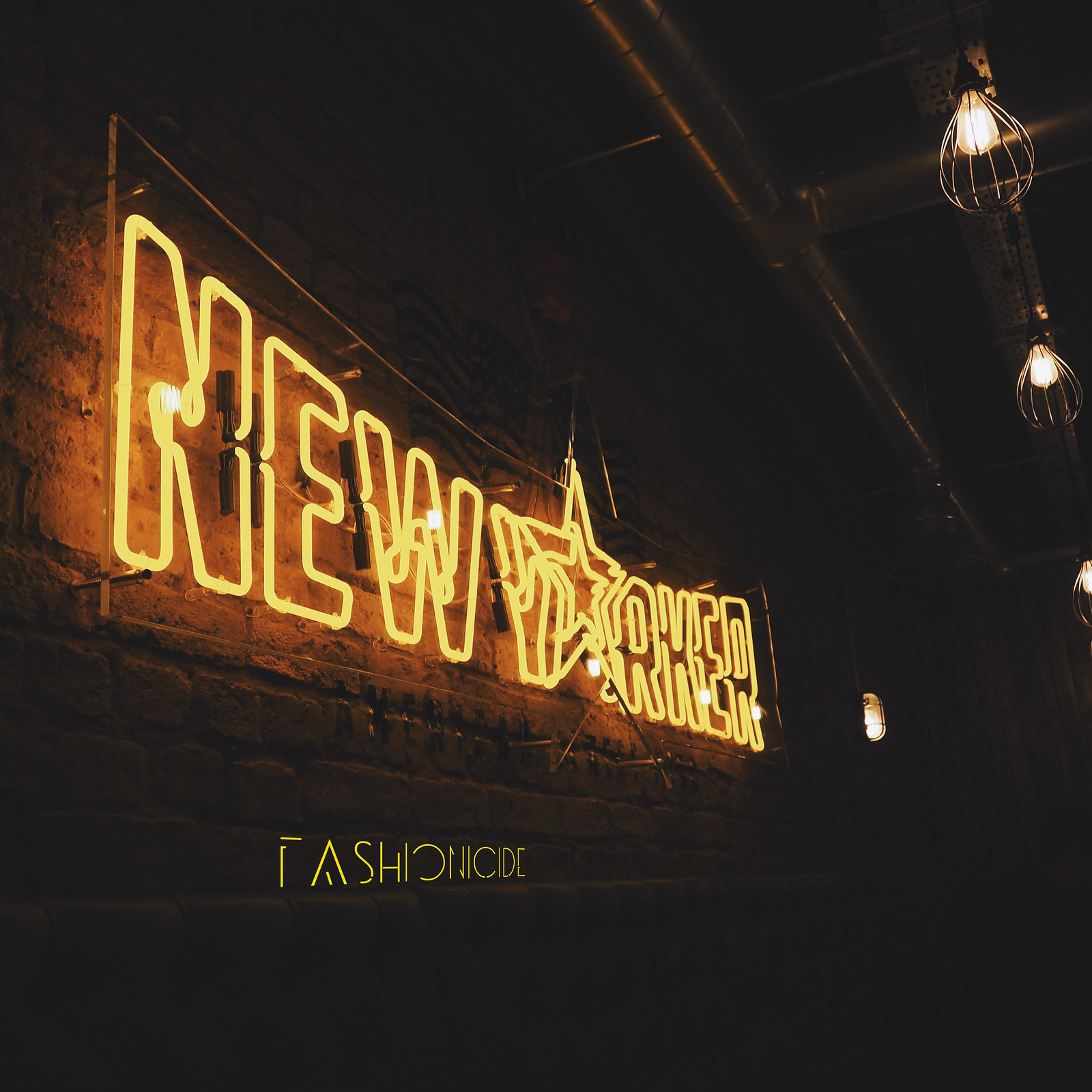 Up here in the North, or specifically Manchester, we're fed up of casting our glance southwards to London, seeing all of these amazing halal burger joints cropping up all over the place. Manchester itself has seen a mini-explosion of burger joints itself in the past 5 years, but none of them have been fully halal. So if you're after a good burger you were restricted in choice to your local takeaway (#no), a chicken burger at GBK or Handmade Burger Co or the Veggie option elsewhere. Nowhere could you get a burger made from halal beef of the gourmet or dirty variety. Nowhere. Until now.

The New Yorker Diner on Portland Street, in the heart of the city finally delivers a fully halal American dining experience for the Muslim foodie in Manchester. It opened up just on the edges of China Town in October, after 6 months of getting the place and their menu ready. So how does Manchester's first (proper) halal American Diner stack up? 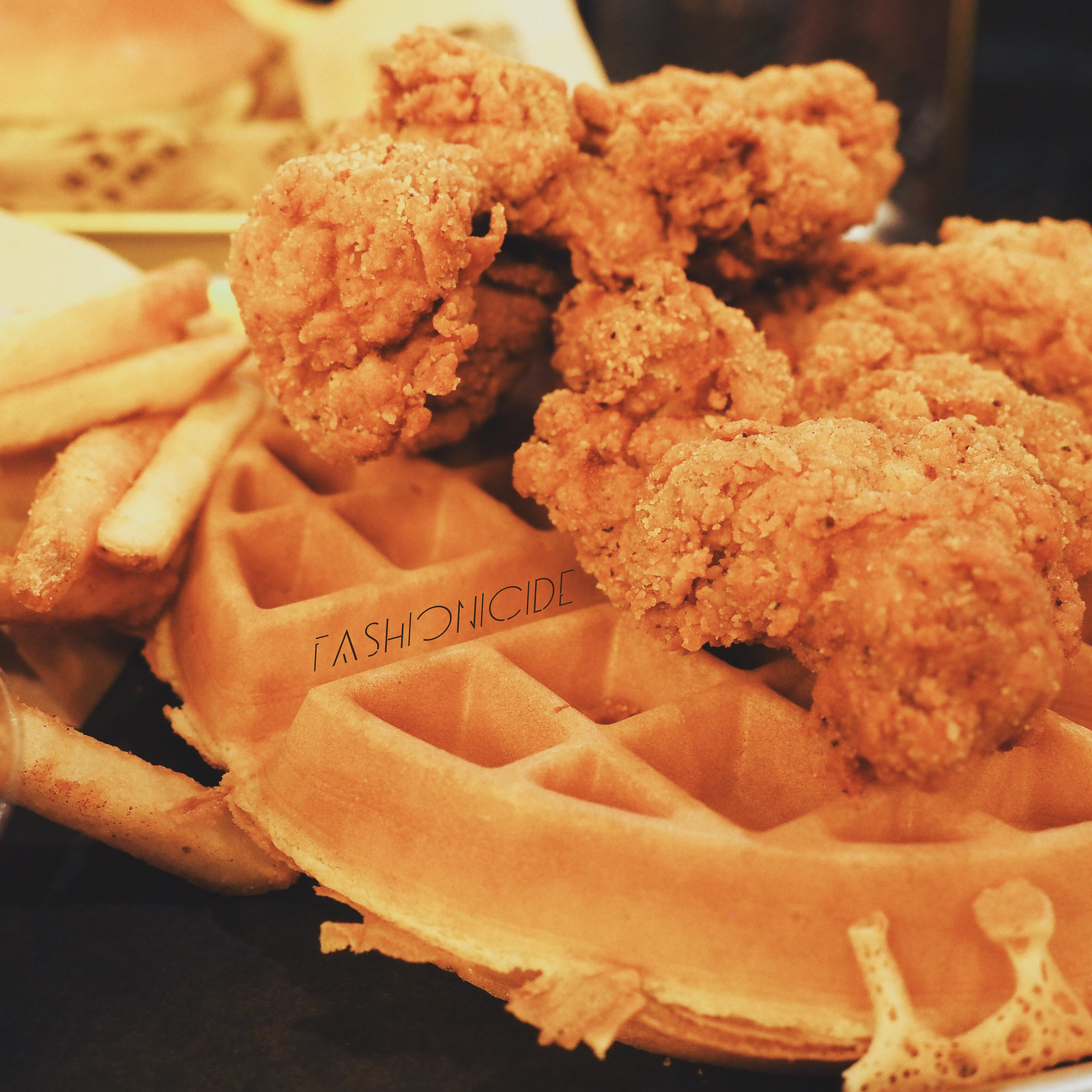 Well, at this stage, I'll say that it has promise. I ordered the Dirty Chicken and Waffle - their take on the increasingly popular Buttermilk Chicken and waffles combo - the OH got himself 'The American Boy' dirty burger, and we both got ourselves some New Yorker fries. I must confess at this point, that I am awfully particular when it comes to meat, so you won't catch me eating beef or lamb!

I wasn't too keen on my chicken actually. The coating was more salty and less buttermilky, and the actual meat itself didn't feel as tender and juicy as I'm accustomed to. If I was being harsh, I'd expect chicken of this quality from a local fried chicken takeaway, and as such, I'd never order it. I was also a little disappointed to overhear the serving staff say they only 'have two chicken and waffles left'. What exactly had they ran out of, and why couldn't more be made? It gave the impression that my food wasn't that fresh. I'll score it 4/10. 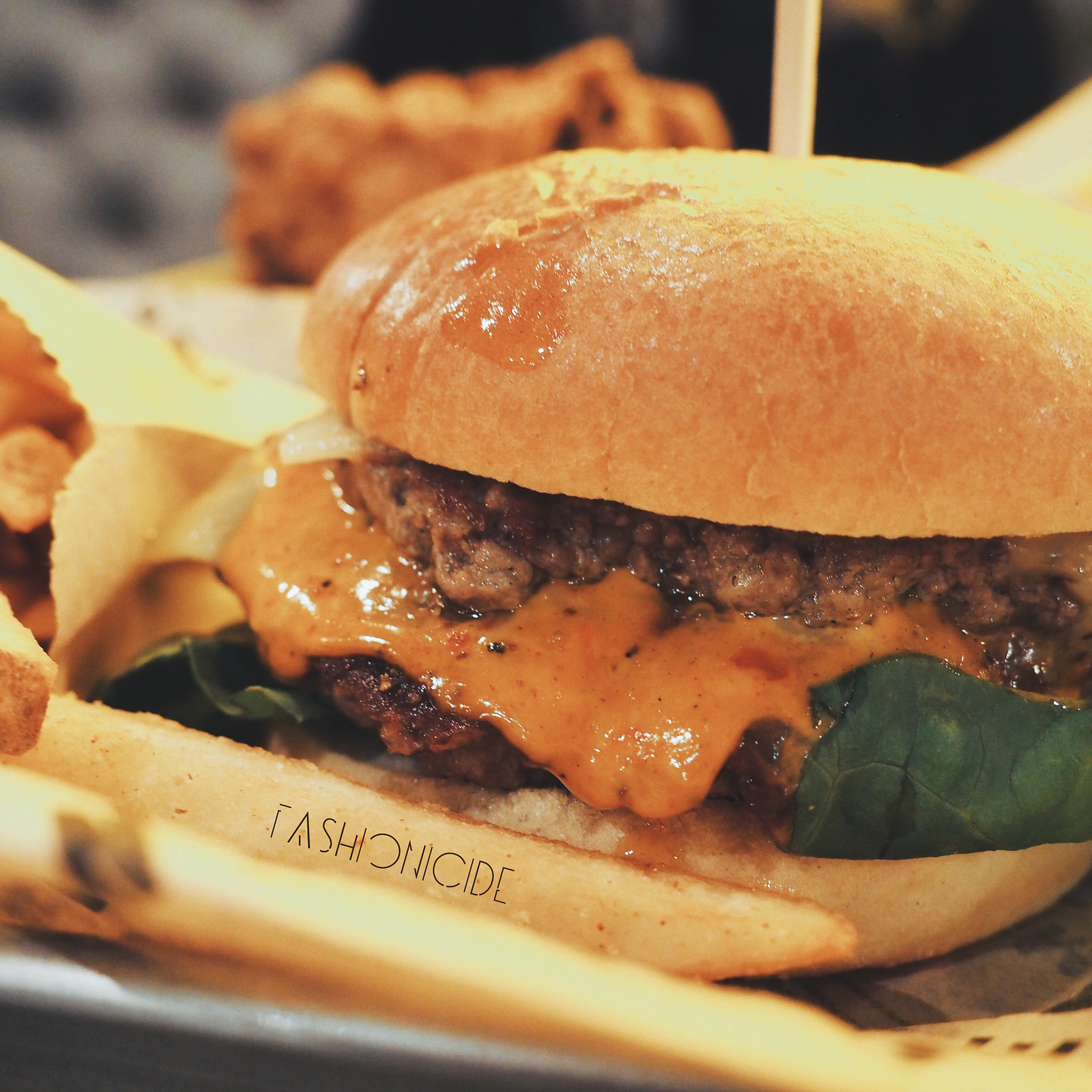 BUT, the OH is particularly hard to please when it comes to burgers. He's had more than his fair share of dirty burgers in the past, and hasn't been all that impressed with some of the beef offerings he's been served up. However, he loved their burger. The beef melted in the mouth, had just the right amount of sauce, cheese and salad - oh, and it was messy! He scored it a much more respectable 8.5/10.

I'm not going to give the fries a rating, but I will say they are pretty awesome. They come skin-on and with a nice seasoning too that complements the main dish. 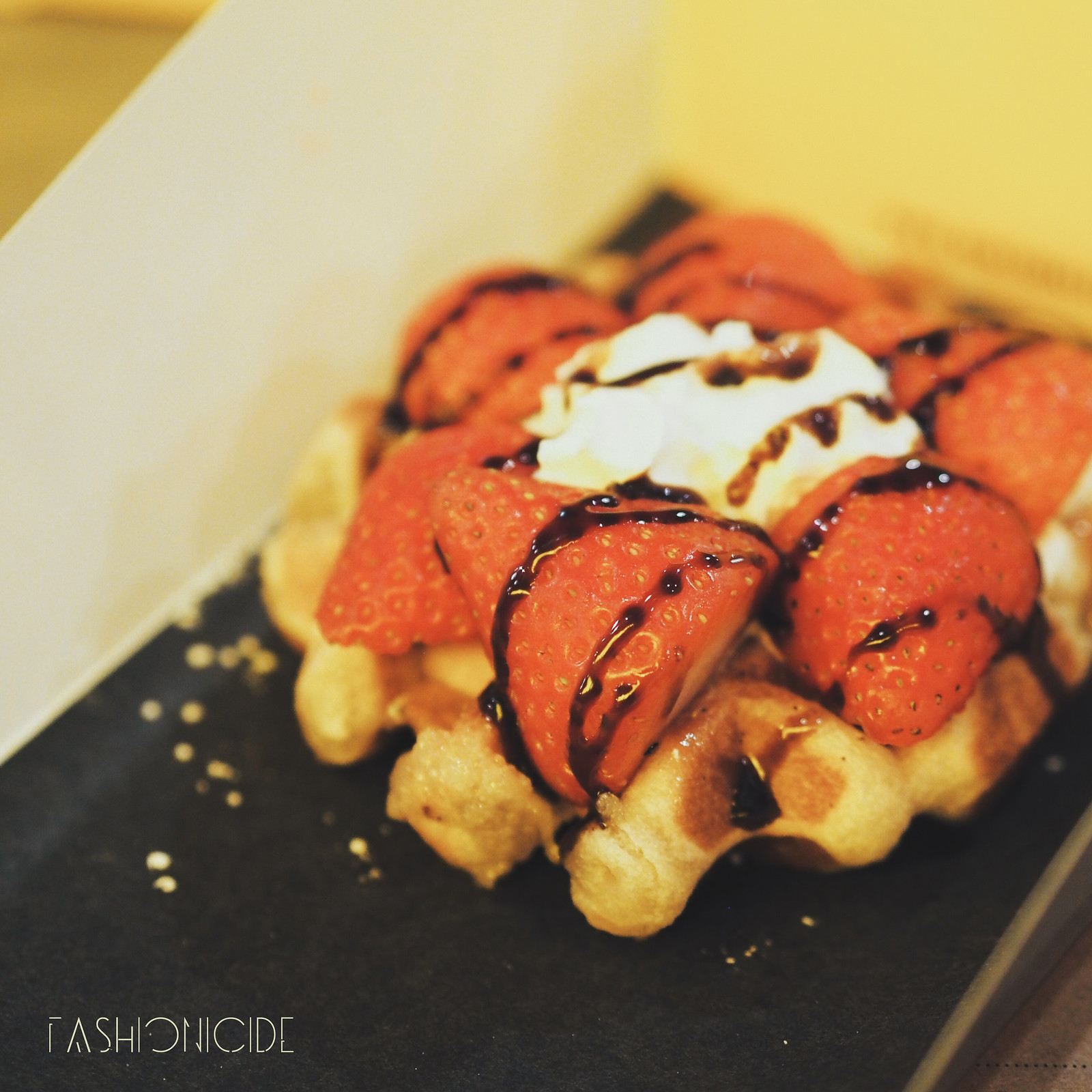 Of course, any American Diner worth it's salt goes pretty hard at the dessert section of the menu too, so naturally we had to indulge. For this, I ordered the State Fair Waffle with Dark Belgian Chocolate Fudge and extra Whipped Cream and the OH went for a Milky Bun with Cookie Cream gelato.

The dessert waffle was a little similar to the packet stuff you can buy in Tesco which was really disappointing. It was certainly different in shape to the Chicken waffle and definitely did not taste freshly made in a waffle iron at all, and the Belgian chocolate was really weak and watery. Whipped cream and strawberries taste the same anywhere you go, so they failed on taste on the two biggest points. My biggest issue though is the actual portion size. The waffle is average size, isn't exactly crammed with toppings, and you only get one. There are now two (cue ridicule) other places to get fresh waffles in Manchester, and both offer much bigger servings for a similar kind of price. I'd rate this 2/10, as you can get quality and quantity elsewhere. 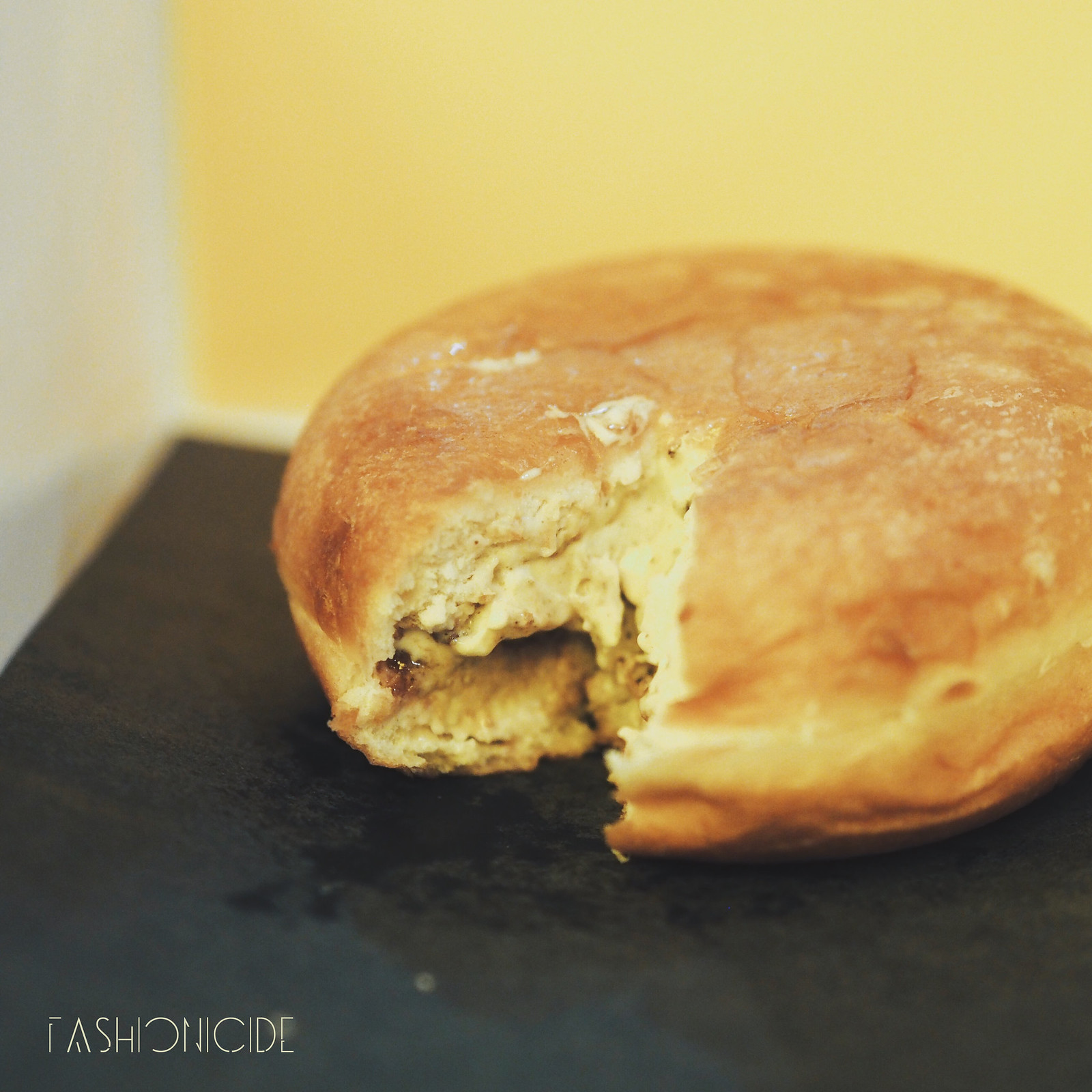 The Milky Bun promised so much, but was a little underwhelming when it arrived (as you can see), it literally is a plain donut, with toppings 'stuffed' inside. It actually tasted amazing, a true American style fried donut, the belgian chocolate and cookie cream gelato inside easing the dryness. But, it seems that much more could be done with this. Presentation wise, it looks really disappointing, like a Sainsbury's jam doughnut and the center was nowhere near as filled as expected. We both expected it to be oozing, but it didn't even spread itself out across the entire doughnut. OH rated this at 6/10, as it was an interesting idea, but lacked visual appeal and a full filling!

Would I return? I actually would, because it is early days and they are just finding their feet. The key for me, is they have the right ideas, it just seems they're not quite there yet. It will be interesting to see how they improve over time, as I feel they need to. There's nothing else quite like it in Manchester for Halal foodies at the moment, and I don't want it to be the last of it's kind either.

The New Yorker Diner can be found at 48 Portland Street, Manchester City Centre.