Hello! Like many of us in the blogosphere, I'd been hearing an awful lot of good things about The Bodyshop's Drops of Youth B... 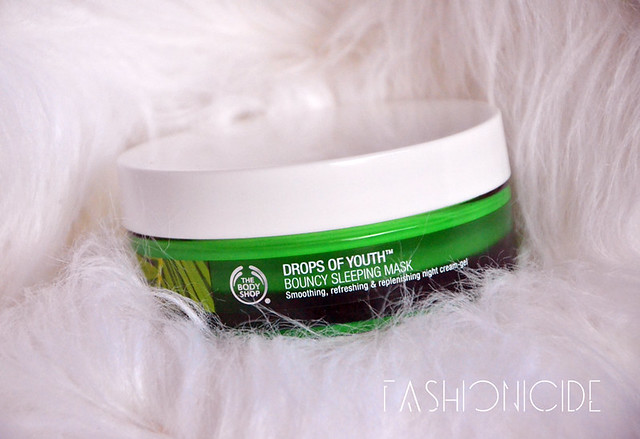 Like many of us in the blogosphere, I'd been hearing an awful lot of good things about The Bodyshop's Drops of Youth Bouncy Sleeping Mask and was just itching to try it out. Although at first I have to admit I thought it was a strange bouncy version of, well, a sleeping mask! Needless to say I was a little disappointed to find out it wasn't some kind of bizarre sleeping contraption, but actually a supposedly useful mask for your face.

My expectations were significantly raised by The Body Shop excluding this product from a 20% off deal on Vouchercloud, which annoyed me slightly as it was fairly expensive for a pot, and it was the only thing I actually wanted to buy, aside from the Argan Oil Body Butter which was also excluded! So I stumped up the full price for Drops of Youth (£22 for 90ml) but left the Argan Oil on the shelf.

Usually in a review, I'd either avoid the subject of packaging or make a small passing observation on it, but this time I'm going to dedicate two whole paragraphs to it because for once, I find the packaging to be important. It comes in a lovely green box with a close-up photo of a plant which immediately makes you think of freshness and nature and stuff. I'd recommend that you don't throw this box away, it does come in handy later on!

The product comes in a glass jar, the same shape and size as the body butter tubs, but because it's made of glass and not plastic, is much heavier and gives it a luxurious and expensive feel. Also within the box comes a tiny little white spatula. It really is a tiny spatula, and it makes you feel like a scientist conducting some kind of chemistry experiment when using it to extract the product from its jar. As cute as it is, it's also vitally important, as I found out on holiday. I left the box and spatula at home, and found when using my fingers to extract it, it literally slid off my finger and back in to the jar! 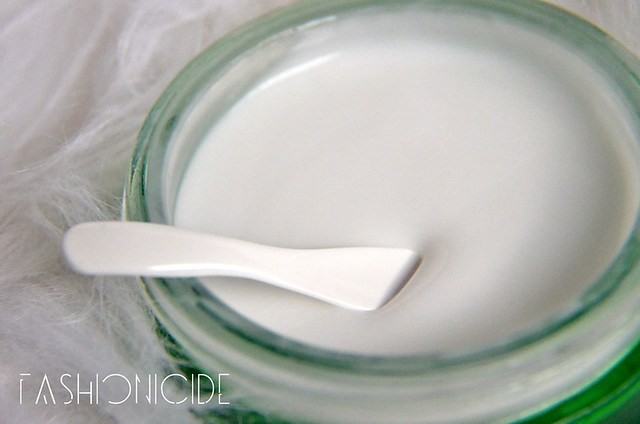 On to the product itself then, The Body Shop describe it as a 'Smoothing, Refreshing & Replenishing night cream-gel'. It has a botanical aroma with a hint of chemicals which makes it smell a bit like a floral Fairy liquid, I quite like that though. The texture is unfamiliar and actually tough to describe, it's a gel-based gloop with memory foam-type properties. If you stick your finger in, it's like touching chilled custard with an unbreakable skin. In a way it reminds me of Wella High Hair's Bouncy Dip styling product from back in my college days - I used to love that stuff.

One tiny little spatula full of the product is enough to cover your whole face, and when applied to the skin you'll notice it feels quite slippery. It's nowhere near as slippery as an oil would be, but much more so than your typical face creams. It'll remain wet on the skin for about a minute or so, so it gives you time to massage it in properly, making sure you can rub it in all over the face.

Obviously it doesn't have any immediate effect, aside from cooling your face down, but it works its magic overnight as you sleep. I've been using this religiously, every night since purchase, and have definitely noticed that when I wake up my skin feels different.

My skin is Oily/Combination but also dehydrated, using Drops of Youth Bouncy Sleeping Mask every night has helped to hydrate my skin and makes it feel a bit plumper. I've even found that it's safe to use under the eyes without irritation, and it's helped to prevent bags under the eyes, even on the roughest of Mancunian Monday mornings! It's almost like caffeine for the face!

So from initially thinking that The Body Shop were being stingy by excluding it from their 20% off deal and setting the price quite high at £22, I found myself thinking that actually they've been pretty generous. Because you only need one spatula-ful per night (about a 5p piece), one jar will last ages. I've had my jar for two months, used it every night and even let the other half use it every night too and I'm about halfway through it. So if you're not one for sharing, it'll probably last you about 6-8 months. Not bad for £22!

Looking back at the claims on the jar, I'd say The Body Shop are spot on with 'Refreshing, Replenishing night cream-gel' - that describes it perfectly, but as for 'Smoothing' I'm not sure if it's made any difference on that front. It certainly plumps and firms up the skin, but I can't see that it's smoothed anything.

Despite that, I really like this product and would definitely recommend Drops of Youth Bouncy Sleeping Mask just for its refreshing and replenishing qualities. It's made my skin feel good every morning, which has been a bit of a life saver for me, what with starting a new job whilst using it. It does seem a touch expensive, but it will last long enough to be worth the investment.