Hello hello!  A couple of months ago, I finally managed to get my hands on the famous Models Own Utopia. It appeared to be s... 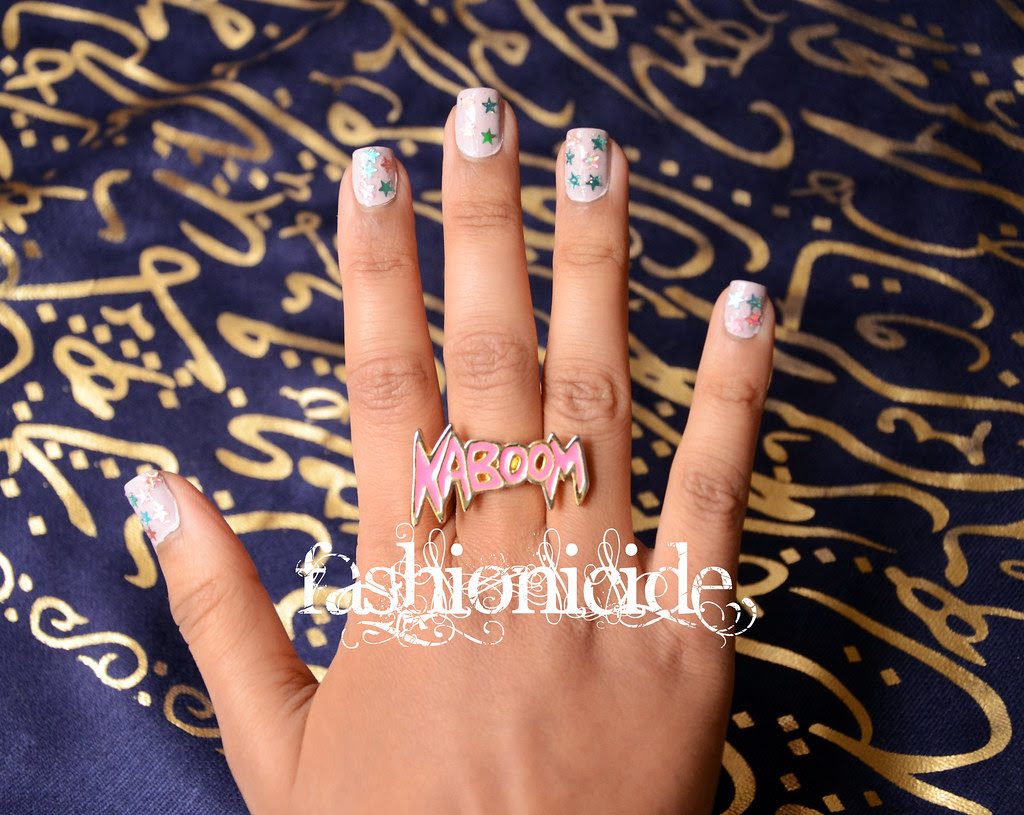 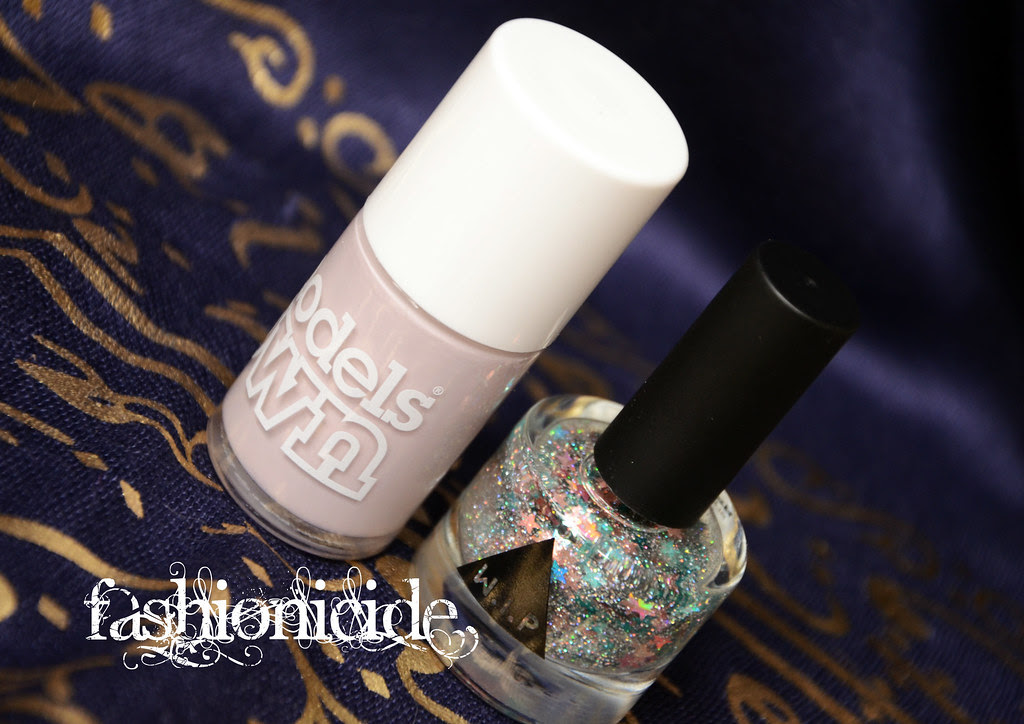 A couple of months ago, I finally managed to get my hands on the famous Models Own Utopia. It appeared to be sold out in my local Boots for months on end until finally, I spotted one on the Barry M Nail Paint shelf, ha! Just shows, if you can't find what you're after, try searching the other make up brands shelves, you may just be in luck!

Today, I've painted my nails in Utopia by MO and applied a coat of W.I.P in Twinkle by Urban Outfitters. 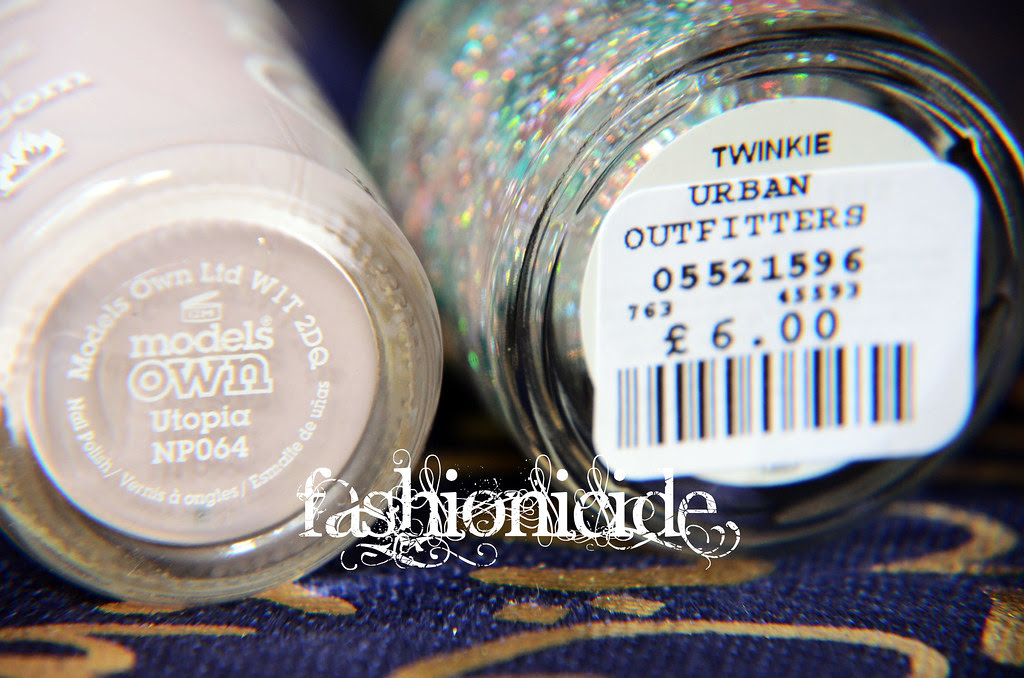 Left to Right: Models Own in Utopia and W.I.P in Twinkle (or is it Twinkie?)

Models Own Utopia is a gorgeous pale milky shade, it's definitely somewhere in between Lilac and Greige and actually from afar it can quite easily be mistaken for a white nail polish.

I freaking love the formula! Most pale/white nail polishes can be a tad streaky which is a pain in the rear end. However, I was most impressed with this, none of that streaky business going on here. The application was smooth and an absolute breeze. With one coat, it's slightly sheer but with 2 coats, it becomes opaque.

In terms of longevity it lasts for two days, by which point you'll start to notice cracks forming towards the top of the nail. I have to say that this isn't unique to Utopia, I find that so, so many of the pale, pastelly colours I've used in the past have been exactly the same. WHY?!

Nevertheless, this is one of those rare shades that look just as good in the relative heat of midsummer (who am I kidding?) as it does in the cold of midwinter. You know how people associate darker colours with autumn/winter and lighter colours with spring/summer? Forget that: this will go anytime of the year.

Best thing is, because the base is so light you can easily add decoration on top to mix it up a bit. I love adding different glitters for when I feel I want a bit of bling, and in this case I've applied W.I.P's Twinkle over it. 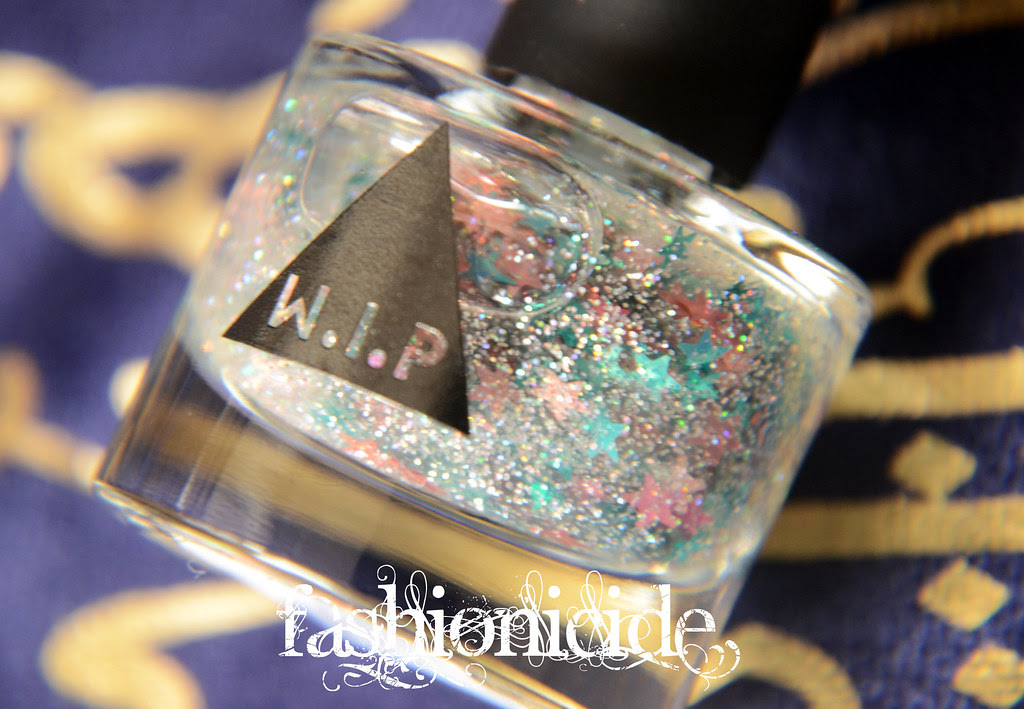 Packed with stars and glitter!

I'm not sure what W.I.P stands for. However, I can only ever find this in Urban Outfitters. I guess it must have something to do with them. I purchased this at the back end of last year when Urban Outfitters were doing a 3 for 2 offer on their Nail Polishes. Bargain! 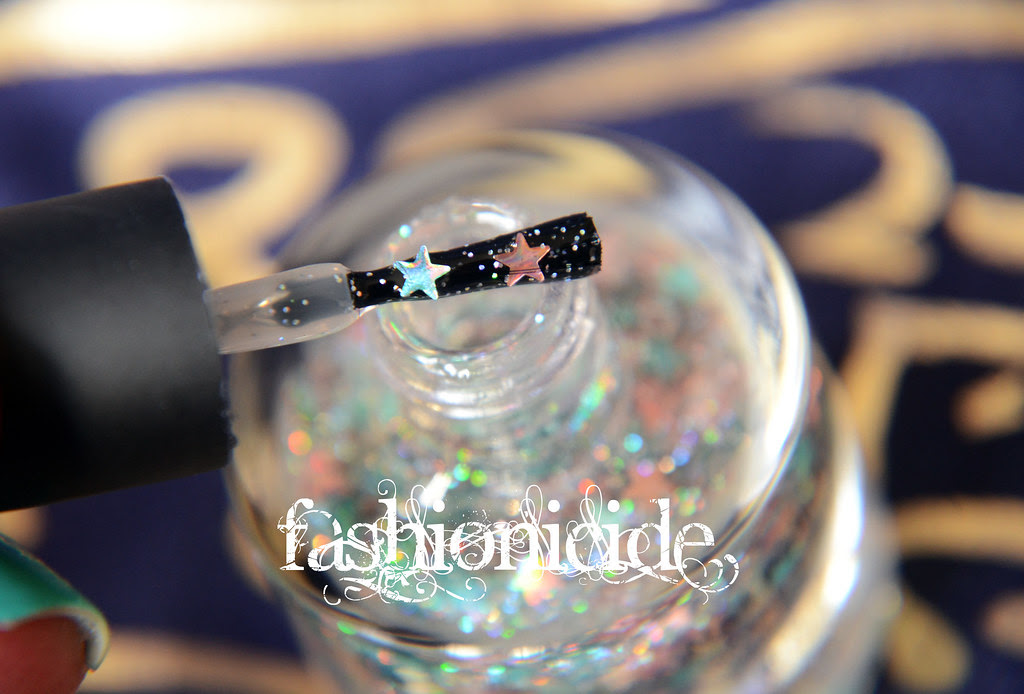 As gorgeous as it looks in the bottle, the polish doesn't quite live up to that on the nail. Maybe it's just me but when you see how packed full of glitter it is in the bottle, then see how sparsely this translates to the nail, it's just a little underwhelming. Then again, it is just a fancy top coat so maybe I'm being too critical!

The polish itself consists of two different shades of stars, turquoise and pink, with glitter of the same colour. The stars are actually a little tricky to apply as they won't go straight on to the nail, you have to dab them on. It shouldn't be too much of a problem though as the bottle is rammed full of them.

What I tend to do is apply this as a normal topcoat, allowing the glitter to spread out over the nail, then pick out some stars with the brush and use a cuticle stick to dab them on to random parts of the nail. Otherwise you'd have to apply layer upon layer of topcoat to actually get some stars on to them, and by that point you'll have gooey, icky nails!

After I've dabbed on the stars I apply Sally Hansen's Insta-Dri Anti-Chip Topcoat, this is just because the stars tend not to stick flat to the nail. Longevity wise, it's terrible. After a day the edges of the stars come a bit loose and quite easily get caught on clothes and even hair.

Everyone loves a shooting star, but not when it's falling from your nails! 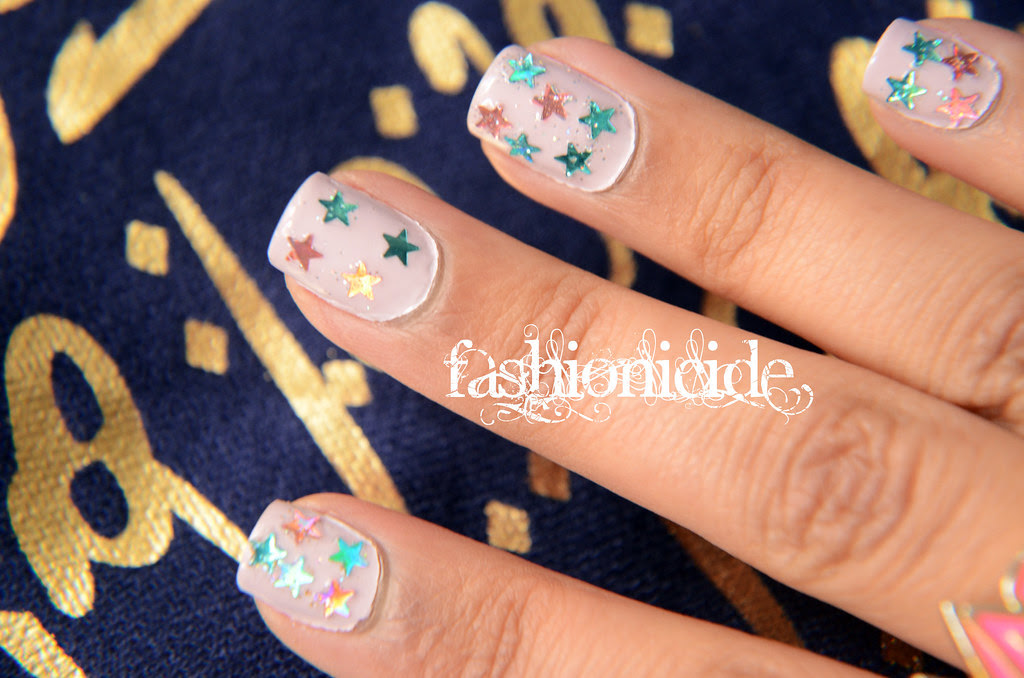 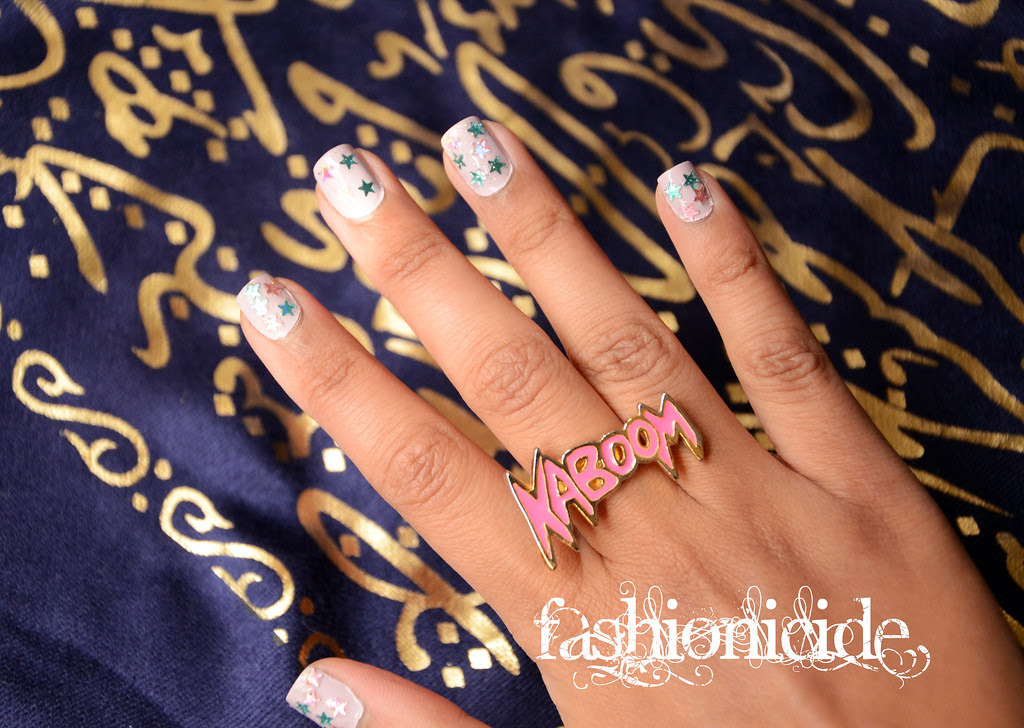 Despite all that negativity, I have to admit it does look pretty epic. I'm awful when it comes to nail art, though I think I'm getting a little better at doing 'Ombre' nails, so top coats like this are an easy way to add a little fun to your nails..

Unfortunately W.I.P. Twinkle is no longer available on the Urban Outfitters website, but I prefer to see that as a good thing. When mine runs out, instead of being gutted that I can't repurchase, I'll head out to a cheap stationery shop and buy a pack of teeny, tiny, shiny stars. They'll do the same job, for much less of your cash.

That being said, I would recommend you check out Urban Outfitters' nail section as they do tend to have some lovely, unique colours at just £6. Also they have regular deals on offer, like their current 2 for £10, so keep an eye out for that too.

I've been a fan of Urban Outfitters Nail Polishes for a few years now and, as far as I can tell, they create a new line of colours every year so it's pretty much limited edition!