Casual Racism in the Beauty Industry

I tidied up my dressing table for this So, I was reading this week's Stylist magazine, after a tip-off from Stephanie that she ... 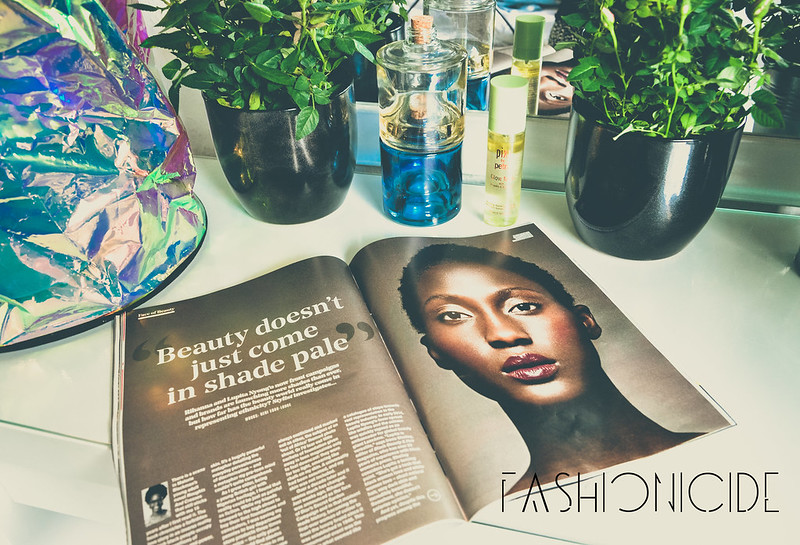 I tidied up my dressing table for this

So, I was reading this week's Stylist magazine, after a tip-off from Stephanie that she may well be featured within. The piece that I was most interested in centred around the beauty industry and the
under-representation of people of colour. I've been talking about this for quite some time on Twitter, and my girl LaaLaa Monroe wrote a great post from the heart on the matter (LINK), so I kind of felt myself glowing as I was reading! Anyways, it got me a-thinking, so I thought I'd share with my lovely, conscientious readers! :-)

The writer did a great job of highlighting a few of the smaller, more banal issues that add up to form part of the wider issue. In fact, I can't recall ever noticing before that plasters were by default made for white skin tones, I had just accepted that colour without even thinking that it wasn't right, after all 'It's the way things are, right?' And this attitude sums up 'New Era' racism pretty perfectly actually.

Whereas my parents, and other first generation immigrants from the 50s, 60s, 70s, 80s and maybe even 90s will talk about how they had to overcome and endure overt racism, I feel that in 30 or 40 years time, my generation will be talking about how we had to overcome 'Smart Racism'. A form of racism that lies beneath the surface, rarely presenting itself in any kind of blatant form, but it's there, working away in the background. Maybe plaster companies don't deliberately make plasters unsuitable for people of colour, but they make them that way all the same.

The beauty industry certainly has elements to it which smack of racism, whether that's through under-representation, lack of choice for darker skin tones or actual misrepresentation. A fairly high-profile blogger, who shall remain nameless, commented on the appearance of ethnic minority models in a fashion shoot, attempting to twist a derogatory stereotype into an actual compliment. No dear, not everyone above NC30 is a gangster.

More and more, I see statistics about how women of colour are spending four or five times the amount of money on beauty products than white women, more and more I hear how the overall spend by women of colour is increasing, more and more I hear that our split of the population is increasing. Yet still, the beauty companies are painfully slow to catch on to this and reflect these statistics in their product lines. If hard financial numbers like that don't encourage them, you have to wonder what they're doing and whether anything ever will convince them.

The first ever foundation that semi-matched my skin tone was actually from MAC and I bought that when I was 22. That's how long it took me to find something that almost suited me, something that's most likely out of the price range of most teenage girls still at school. You might think that keeping young girls away from things like makeup is a good thing, but when white girls have access to a much wider range of tones and products from a broader selection of companies at affordable prices, you can see that it's patently unfair.

Even now I find myself avoiding high street brands, not out of some kind of moral boycott, but more because their offerings for people of colour are just pathetic. Even where an offering actually exists and isn't too bad, often the training of the staff working the counters is severely lacking, to the point where it actually begins to get offensive. Take Clinique for example, they may be slightly more expensive than the average high street brand, but a few months back they launched a new foundation called 'Beyond Perfecting Foundation & Concealer' boasting of a wider range to cater for a variety of skin tones.

Naively perhaps, I gave them a chance, visited the counter and asked to be matched. The girl at the counter 'matched' me to a shade that made my face look orange. I told her I looked like I'd been Tangoed, but she insisted that 'It makes you like you've got a tan and just come off holiday'. Where do you start? I actually replied: "I'm brown already, why would I want to look tanned?" She was gobsmacked, and kind of floundered around a bit before offering me samples of the same shade to try at home.

You might think that I perhaps sounded a bit rude or confrontational in my exchange with the Clinique girl, but I think it's important to say it how it is. For too long women have dealt with morally repugnant issues occurring on a daily basis without making a fuss about it, but we can thank Laura Bates and the Everyday Sexism Project for actually giving us the courage to pause and think:


It's not about being confrontational for the sake of it, it's about confronting people who do things which you find to be unacceptable. I found it ironic that as I was reading the Stylist article on the tram, a shabby looking white male kept looking me up and down, blatantly, during rush hour. Before, I'd have probably accepted it as being normal, and maybe even thought that it was my fault for having my legs on show. But no. It's not my f**king fault if some perverted, entitled male thinks it's ok to ogle me like a piece of meat. So I shot him a nasty look, one that made it perfectly clear how disgusting I thought he was.

That's what women of colour need to do with makeup and beauty too. If you're matched to a colour that makes you look ridiculous, and the sales staff are trying to convince you it looks great, don't do that annoying British thing of side-stepping the issue - just say your piece! It isn't being rude, or nasty, just tell them what you think. We can never foster a culture of learning and understanding if we just lie to spare ourselves an awkward conversation.

I'm glad that Stylist have decided to take a stand on this issue, and give women of colour a voice. It helps that they've actually brought people on board, like Stephanie, who experience this issue on a daily basis and gives them credibility. It's particularly pertinent for the cause that Stylist are driving this, as it's a free publication so should give the issue plenty of free exposure to the beauty-loving public.

After reading it though, and feeling a bit elated that such a large-scale publication has taken the issue seriously, my heart sank when I saw on the very next page there was a full page ad for Clarins, featuring all white women. Whilst I may have sniggered a little at such irony, it also re-ingnited my cynicism. Like I said, I'm glad that Stylist have taken this on, but part of me feels that this could just be another 'Hot Topic' that they're jumping on board for now, only to drop later on when the next topic comes along.

I guess only time will tell on that one.