Iridescent makeup . I am obsessed . Whether that be lipstick, lipgloss, eyeliner, eyeshadow even nail polish - I love it and I want i... 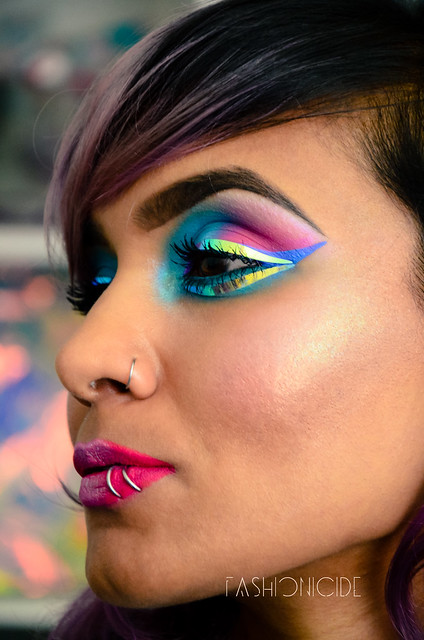 Iridescent makeup. I am obsessed. Whether that be lipstick, lipgloss, eyeliner, eyeshadow even nail polish - I love it and I want it all. Now. The only thing is, it's a little difficult to find, and believe me, I have scoured the entire Internet in pursuit of the iridescent goodness. Along the way, I've found a few false idols and a few absolute gems - I'm thinking Inglot's AMC Lipgloss in 541, which is how I imagine the blood of Aliens to appear!

One of those false idols was an interesting looking iridescent liner by Essence Beauty. In the bottle, it really looked the part, and I was seriously excited to try it out for the first time. But alas, when I applied it, it was incredibly sheer, barely even showing up on my skin at all. I thought it might be worth a try to layer it over another liner, but even then it just looked standard metallic as opposed to colour-shifting. Sigh.

Anyway, I was invited down to IMATS London by MUA to the stars, Phyllis Cohen, the creative force behind Face Lace. Just a few days before heading down, I'd spotted a little promotional photo on their Instagram of a new product - *Dazzlescent Liners - which would be available at IMATS. Well, now I was looking forward to it even more!

Upon arrival, Phyllis could sense my obvious excitement for these Iridescent liners I'd seen, and we both tore open the packaging like a couple of giddy schoolgirls at Christmas. I was already wearing a cocktail of eyeshadows and eyeliner when Phyllis made me the first person to try them out and started applying the Iridescent liners around my eyes, so I was a little worried that they might just peel off there and then. No need to worry though, as it turned out, they lasted ALL. FREAKING. DAY. 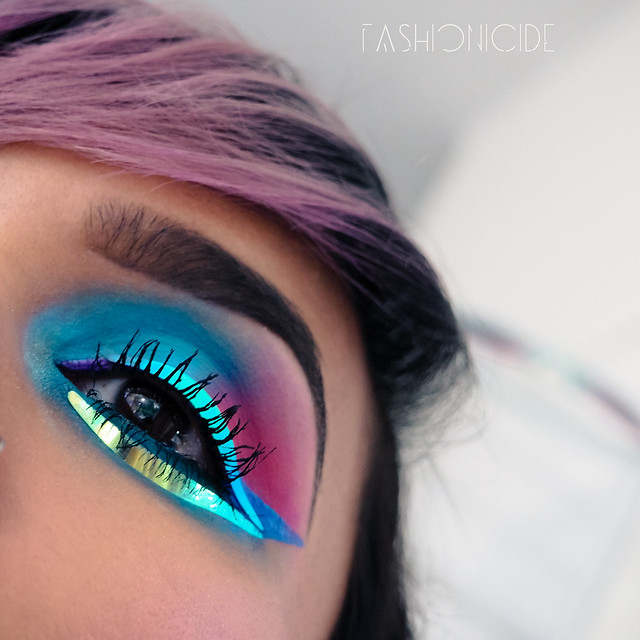 As if that wasn't impressive enough, I was surprised to find just how light they felt on the eyes. At first glance, they look like heavy duty metal on your lids, but I really couldn't notice them. It  got to the point where random people were staring at me as I walked around the hall, and I started to wonder if I had something on my face!

It's easy to see why people were staring though, as Phyllis had applied two pairs to my eyes - one pair on the lids, and another pair on the under eyes. They look simply stunning, it's almost as if you have a set of flawless curved mirrors around your eyes that change colour like a chameleon as they adapt to the different ways light bounces off them. I felt as though I was the female lead in a big budget Sci-Fi movie, these are definitely the future.

As you can imagine, the liners were a sensation in the IMATS hall, with a fair few people stopping me to get a photo as I wandered around. My head did start to inflate just a little, but I had to remind myself: "Lima, they're only interested in the kaleidoscopic liner, not you." Ha! It was a pretty sweet pre-release debut for the liners, as there was a fair bit of a buzz around them, to the point they actually sold out - but don't worry, I managed to get my hands on a packet. 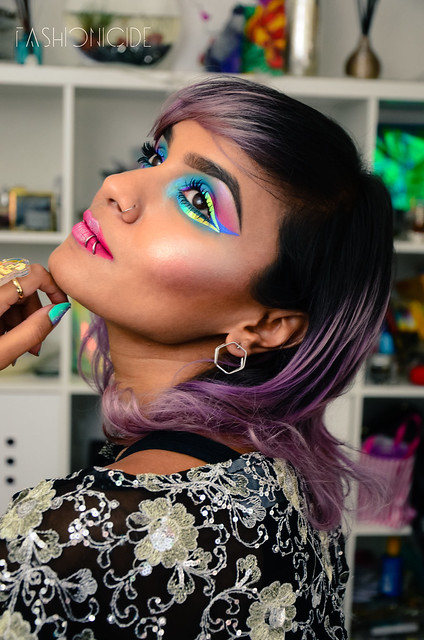 The great thing about the *Dazzlescent liners is that they're reusable. In my case, the ones I'd worn to IMATS just couldn't be, as the adhesive had managed to get quite a bit of my makeup stuck to it, so I did a 'non-makeup' test and found that once peeled off after a day's usage, the liners still have plenty of stick left in them.

To use them, all you need to do is take one adhesive, apply it to your eyelid and you're good to go. It's that simple! There's no need to create any elaborate eye makeup looks beforehand (though nobody's gonna stop you!) I'd recommend that you apply the stickers to an area around the eyes where there is no makeup, just so you can make them last longer. Then, at the end of the day, you just peel it off and put back in the packet. 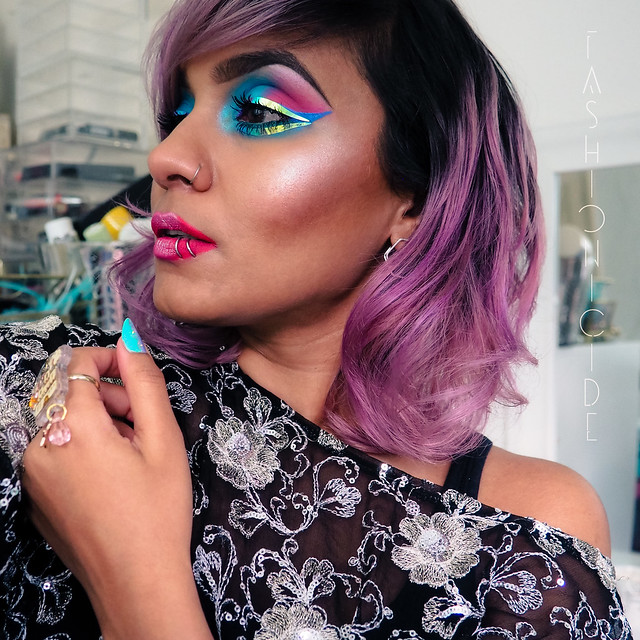 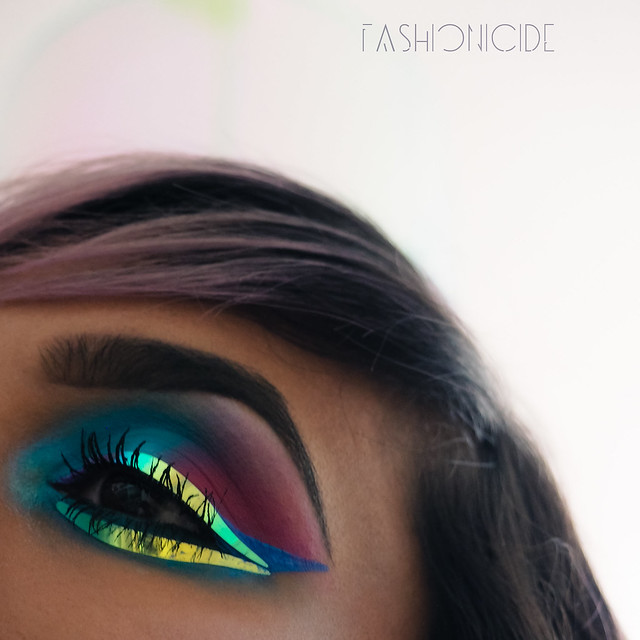 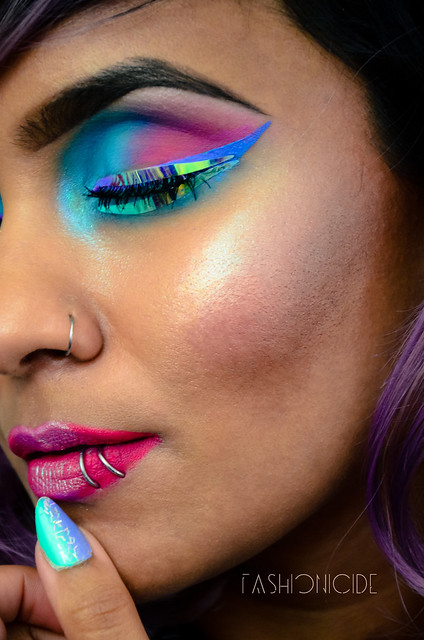 The *Dazzlescent Eyeliner by Face Lace come in a pack of 10 pairs (note that in my photos I am wearing two pairs) and will be retailing at £12.95. At the time of writing, they are yet to be released, but hopefully by the time you're reading, that will all have changed - expect them to be on the website sometime next week!