They say that you don't pick a cat. The cat picks you. With Willie, neither was the case. Fate brought us together. That may seem... 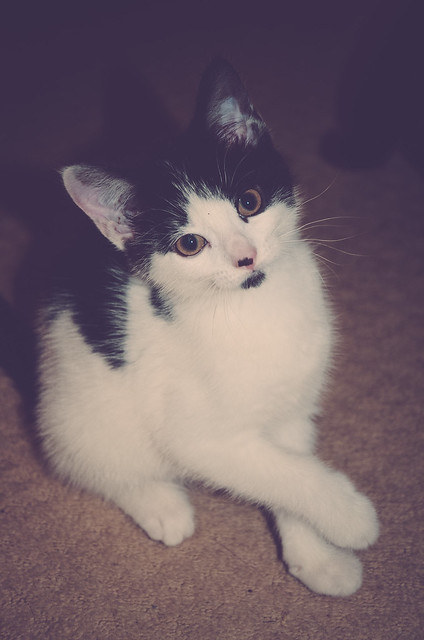 They say that you don't pick a cat. The cat picks you. With Willie, neither was the case. Fate brought us together. That may seem a touch melodramatic, but we both needed each other at the time, and the way our paths crossed could surely be no coincidence.


It was in May of 2013 that I first met Willie. She had no name at the time, and I was looking for a kitten. We'd come to a Cat Rescue Shelter to find a male cat, as we thought another girl might not get along with our Girl. The staff showed us all of the kittens they had available for rehoming, and because we were looking for a boy, our encounter with Willie was brief. She stared at us through the cage, sliding her paw through the gap and crying.

We moved on to the male kittens, found one that we liked straight away. He was six weeks old, too young to leave his mother, but if we came back in two weeks time we could take him. Come back two weeks later, we did. His whole litter were ill, and as a precaution, they wouldn't let us take him. My heart was set on taking a kitten home though, so we took a look around.

Willie was still there, with her jet-black sister hidden at the back of the cage. She was crying at the cage again, so we took her out. She was immediately climbing all over us, curious, adventurous and not in the slightest scared of us. We had to have this one. But there was a slight problem: these two were the only survivors of a litter found at one week old, mother nowhere in sight. If we wanted Willie, we had to take Alisa too.

We took them both, and never looked back. 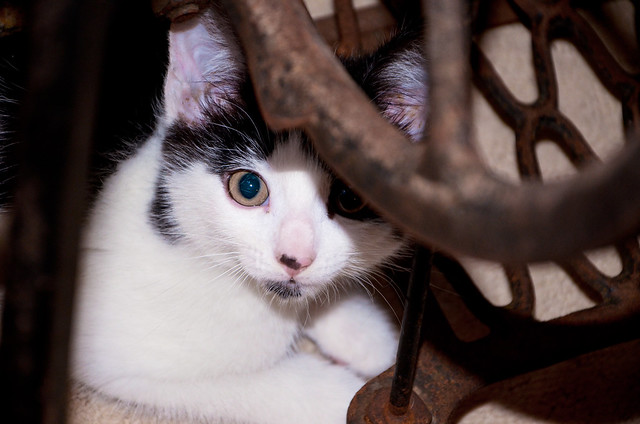 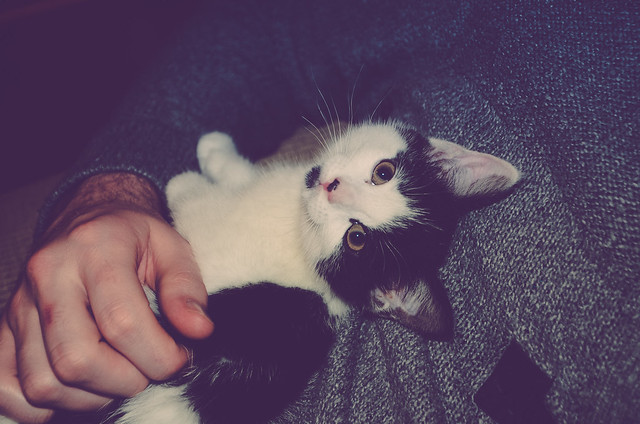 Willie and Alisa needed someone who'd really care for them and they were both little angels with a streak of mischief, as you can see. I remember the first day we had them, they both ran rings around us before falling asleep on the OH, and he fell asleep with them. A sign of things to come!

In a strange way, their lack of a maternal figure in their early weeks made them all the more lovable, they hadn't been taught how to 'be a cat'. Until her dying day, she'd lick the beard of the OH, grooming him. Our Girl taught them a little bit, and looked after them, but Willie's sense of adventure meant she was never to be fully tamed. Indoors, she was as soft, cuddly and loveable as they come, outdoors she was daring, cunning and athletic.

At the time I was watching re-runs of Ugly Betty and for some reason, Willie just scratched me! She reminded me of Wilhelmina Slater: sassy, uncompromising, playful, cunning and beautiful - hence she was named Wilhelmina Slater. 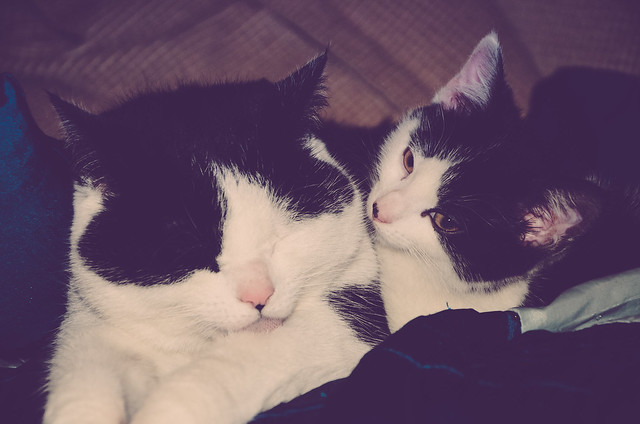 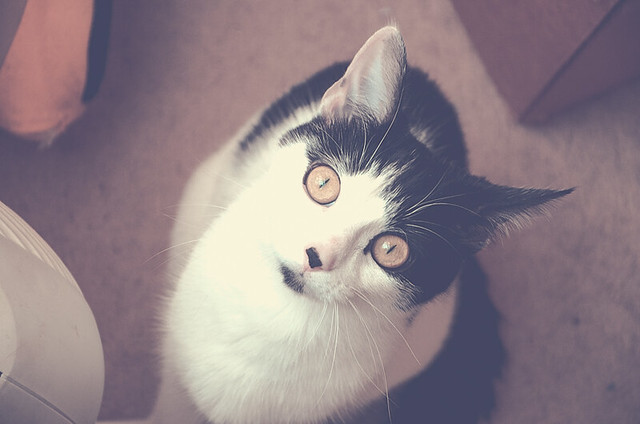 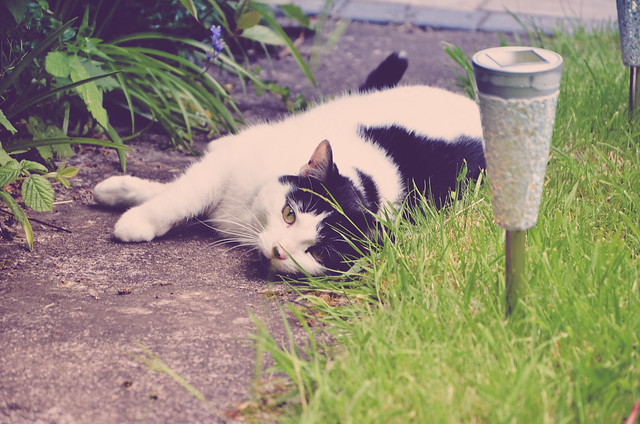 We watched her grow, from a cute, scrawny little ball of fluff into a mini-lioness patrolling her turf. We saw her become ever more loving, ever more adventurous. We were there when she was spayed, when she was so shattered from the operation, she couldn't walk more than a few steps. We were there when she took her first steps outdoors. Every time she was near, we were aware of her presence. She was always doing something to make us laugh or smile.

We moved house, from a horrible flat that made it difficult for her to go outdoors, to a huge (on her scale) house with a garden for her to play in and forest beyond that for her to explore. She was in her element. One thing that will always stick in my mind was the first day in the house, she walked down some stairs for the first time making a cute little crying noise, almost as if she was excited by it all. 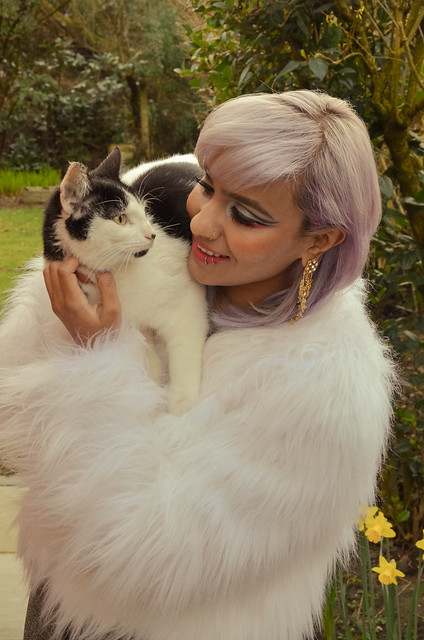 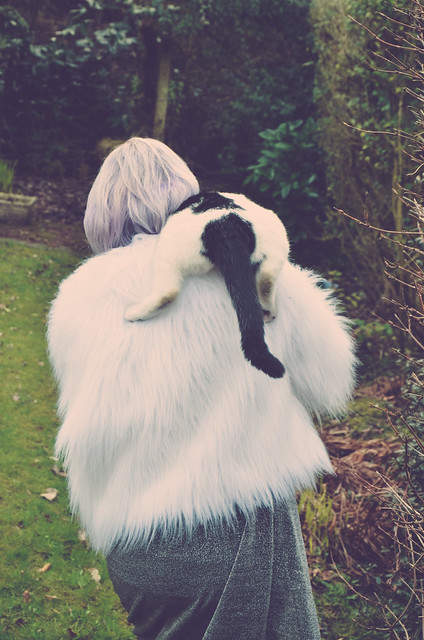 It's so cliche, but also so true, to say that she was no ordinary cat. She'd leap up onto our shoulders as we cooked dinner in the kitchen, and sit there perched, just watching what we were doing, purring away in our ears, tail swatting our faces! Her latest trick was to somehow make it to the ledge outside our bedroom window and either prise it open or cry to get in.

And then yesterday I got the call. You don't dread it, because you think it will never happen. But happen it did. She was killed in a road traffic collision, reported not by the driver, but by a man walking his dog. She was dead. The call was like one of those ridiculous scenes in a terrible movie, where the main character somehow knows exactly what's going to be said. The world may as well have stopped spinning at that point.

I look at all of these photos, and I laugh and cry. I laugh at how adorable she always was and cry because I can see her but will never be able to pick her up, hold her, stroke her or hear any one of her multitude of cries. She's gone, but she was never a pet, she was my little friend who'd sleep on my chest when I felt down and make me feel even better when I felt good. Her death leaves a lion-shaped hole in our lives, one that I wonder whether it will ever shrink or be filled.

Every little flicker of movement in the garden, I swiftly turn my head in hope. Every tap on the window, I quickly check. That night, I lay awake looking at the window, hoping beyond all hope that her cow-print body and snake-like tail would be pressed against it, trying to get in. I find myself going in to the garden and calling out her name, because I don't want to forget what it feels like. The thought of going through life without ever calling out her name and seeing her little face pop around the corner is unbearable.

Every little part of this house there are memories of all the things she used to do. Right now they just make we want to burst into tears, I hope soon they make me smile instead but it feels a long way off. 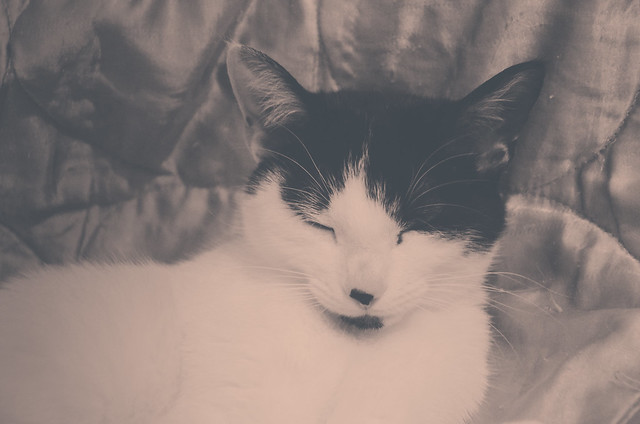 All that's left to say is goodbye, my little friend with the biggest, warmest heart.

I will never forget you