Hello m'dears! Ever since moving out of my 1 bedroom flat and into a two-slash-three bedroom house back in October, I've been g... 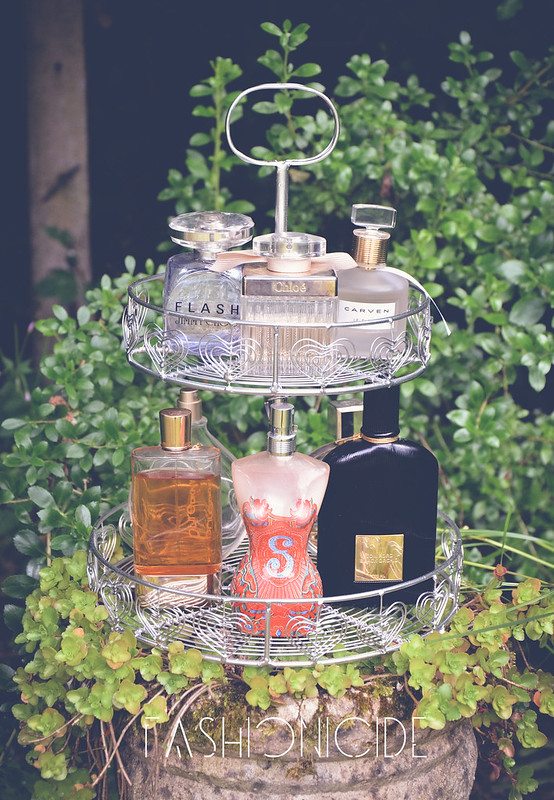 Ever since moving out of my 1 bedroom flat and into a two-slash-three bedroom house back in October, I've been getting so much more into homeware. In fact, it's reaching critical levels now! Over the past few weeks, I finally finished off the bedroom, which has become my haven. It's clean, it's crisp and it looks so dreamy now that I've fitted a canopy over the bed with added fairy lights for ambience.


Now that all of the heavy work is over and done with, I've been scouting all good homeware stores and departments for ornamental type objects to add more of a personal touch. I've never been much of a 'bunch of roses' kind of girl - nothing says romance like a bunch of dead flowers in a vase - but lately I've been snapping up potted plants left, right and centre. I've got three different colours of rose, a huge blue orchid, a plethora of cacti and a curious little Ginseng plant all fighting for position on the window ledge.

There has been one very elusive piece of the puzzle though, and it's taken me ages to find one I deem worthy of a place in my room, is some kind of display stand for my perfumes. I feel that they deserve so much more than just another box in the Kallax, they should take pride of place somewhere in a special case or stand. I looked at a few antique silver trays that would have done the trick, but they were too expensive for my taste.

So I kept on looking, and something that was cropping up over and over again was the humble Afternoon Tea set, converted from a holder of cakes, scones and tiny sandwiches to a holder of perfumes instead. Whichever genius thought of this, I could kiss you!

But this was beginning to feel like a false dawn, as most of the afternoon tea sets I was finding on the net were just, well, crap really. So I popped in to my homeware go-to, Homesense, after work more out of hope than expectation. My hopes were dashed, as again, they were all pretty dull and generally meh. But then I came across this old-fashioned looking one, with a kind of rustic edge to it. The burgundy paint had worn off a little in places, revealing its gun-metal origins.

Still, I wasn't completely convinced. And then it hit me: 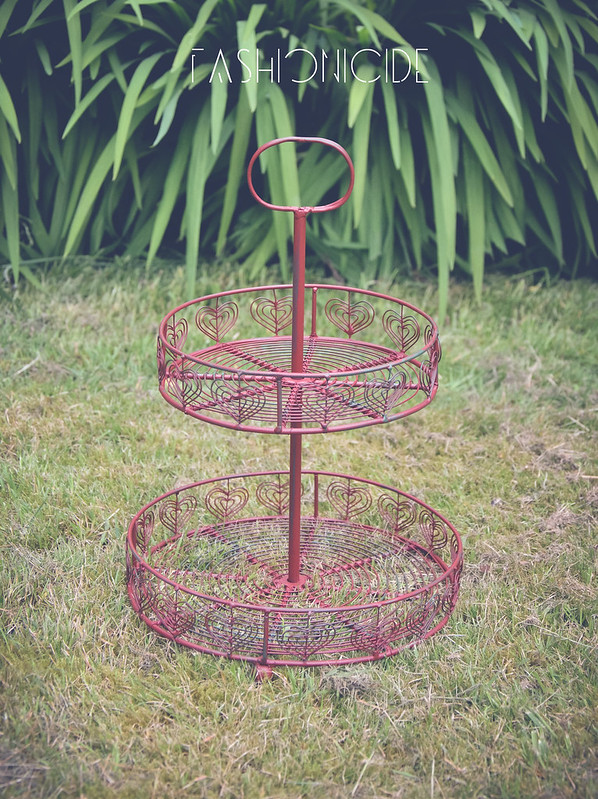 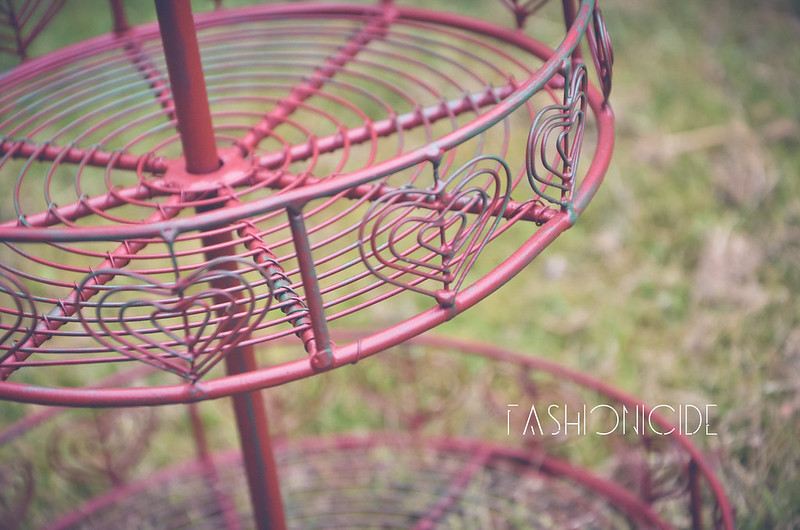 The burgundy frame has some ornate little love-hearts circling each tier, the perfect design for displaying perfumes. 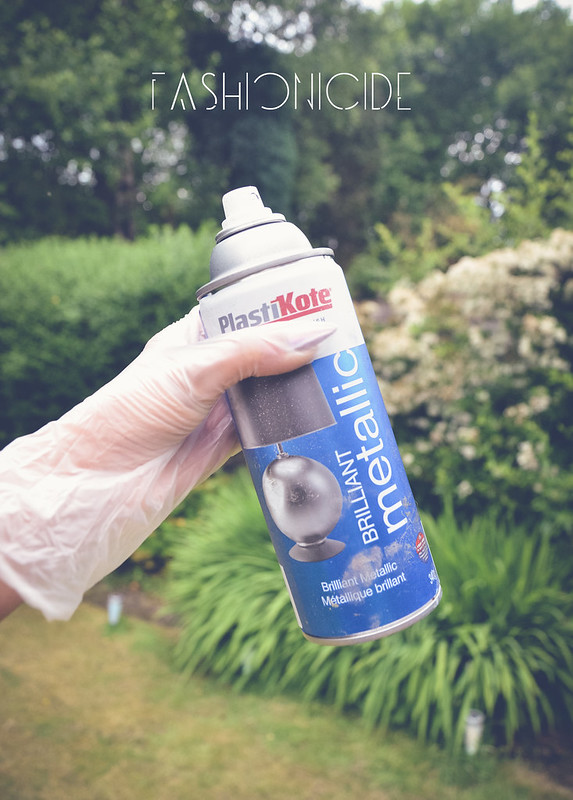 I picked up this Chrome finish silver spray paint from a store in Manchester called Fred Aldous last year, with the intention of upcycling some other random bits and bobs. Needless to say, you can tell by the paint splatterings and fingerprints on the can, that I had a lot of fun! Fred's isn't so much a hidden gem as it is a Mancunian institution - it's all about arts, crafts and creativity. Think Paperchase, but better. People travel from afar to lose themselves in its aisles of wonder, and I could spend days in there.

I put on a pair of goggles, a dust mask and a pair of gloves to protect myself, believe me if you're spray painting outdoors you need them! I may or may not have accidentally got some paint in my eyes in the past. 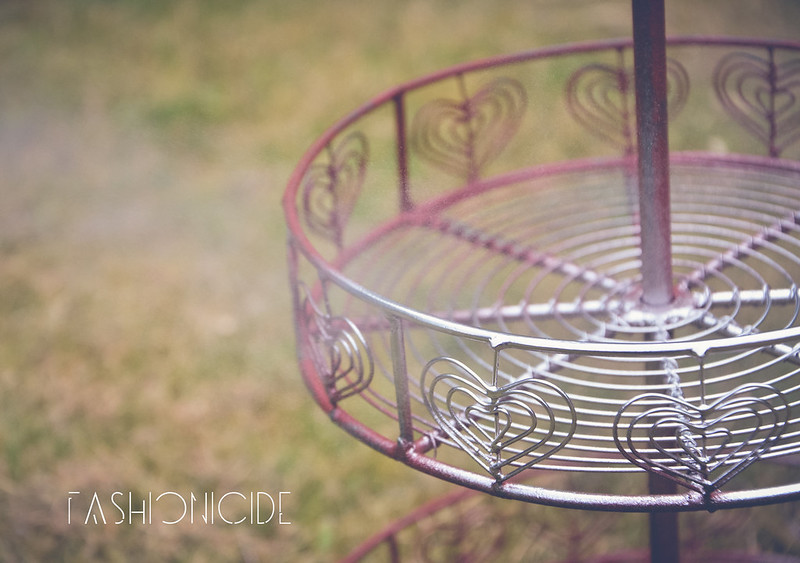 Pretty simply, I sprayed every single bit of the stand, before letting it dry for about 30 minutes. By then it's touch-dry, so I can pick it up and tickle its belly with some silvery chrome goodness. It was whilst doing this I noticed a tiny little insect coated in silver. NO. You will not ruin my perfume stand, and I flicked it off. No mercy.

I then let it stand for around an hour to allow it dry right through. Once done, I then stuck my perfumes on in a calm, orderly fashion! 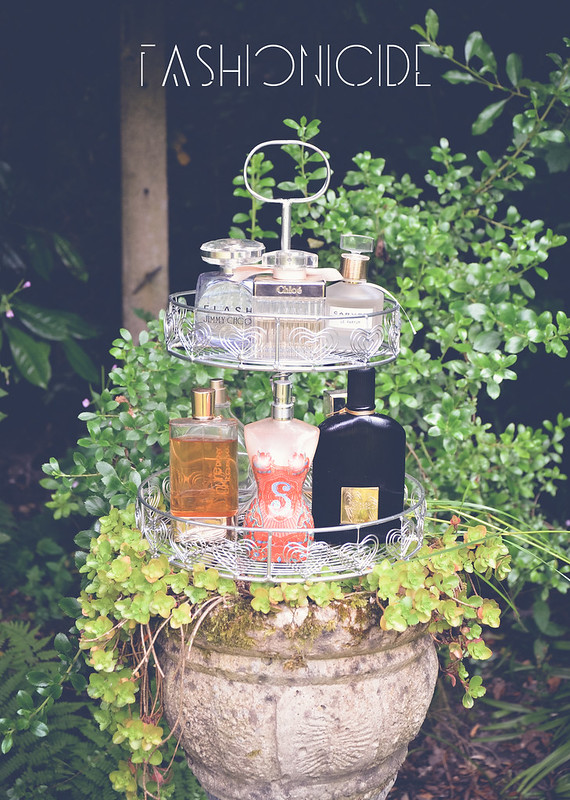 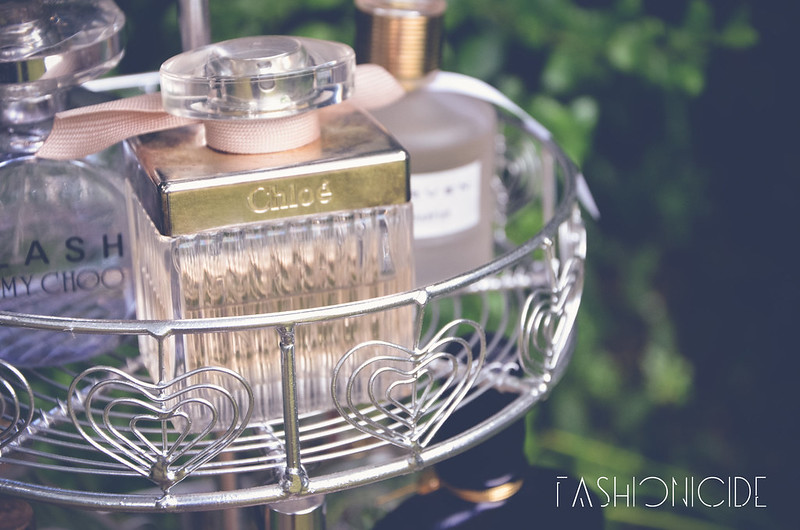 Oh hello Chloe! My HG perfume since 2009! It's got to be one of my signature scents, people I know in my everyday life automatically assume I'm nearby if they catch a faint whiff. 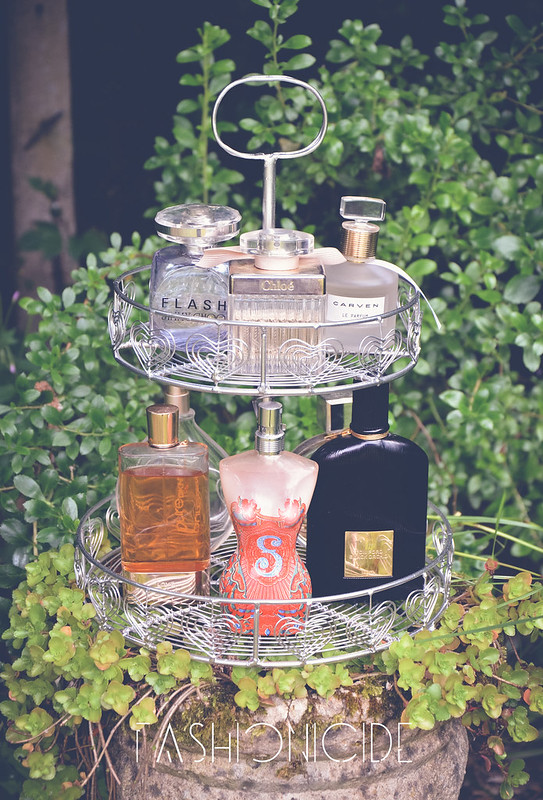 After squeezing them all in, I actually realised that I own far less perfume than I thought I did. I guess that's because I know what I like and stick to it, it takes something exceptional for me to purchase it. I also noticed that my Jimmy Choo is leaking, which is a little weird, no?

I thoroughly enjoyed this mini upcycling session and wondered why I even stopped doing it in the first place... Well actually, I got a full time career, ha!