Ain't Nobody Got Time Fo' That!

Ain't Nobody Got Time Fo' That!

I love social media, I love how you can talk to and get to know people from all walks of life all over the world with common interests...

I love social media, I love how you can talk to and get to know people from all walks of life all over the world with common interests. I started up my blog because I was getting a bit frustrated trying to find make up that suited my skin tone, there were a fair amount of bloggers around at the time but I couldn't find many that helped me out. Back then I was relatively new to make up, and I was over the moon as I started finding and blogging about products that suited my skin tone.

What I really loved about blogging initially was the community. I mean let's face it, how many people do you know in real life that are as beauty/fashion fanatical as you? I can't speak for anyone else, but my friends were into it but nowhere near on the same level as me. So to communicate with bloggers who were just as mad about make up as I was, was fantastic!

Nowadays though, I find the scene to be completely different. There's been an explosion of bloggers meaning there are far, far many more than there was back when I started up in 2009. So getting your blog, your image or your personality out there via social media is increasingly important.

After much observation, I've noticed that competition is fierce and seemingly every other day on Twitter there are arguments between bloggers and actually it's made me feel pretty uncomfortable. I've spoken to my girl Laa Laa about this and she feels the same too, it isn't just me.

We are all entitled to our own opinions of course, and equally we are all entitled to share them. Believe me, my friends know what an opinionated person I can be! But it's a lot easier to object to something face to face than from behind a screen. In the form of texts, tweets, blog posts, emails or facebook statuses it's pretty easy to take things completely out of context as we miss out on things like tone and body language.

Something I've noticed is that constructive criticism is sometimes unwelcome, some can get quite upset over it. I struggle to understand that. The whole point of constructive criticism is to help you improve! Sure if you don't want to take it on board, fine. But to get defensive or aggressive over it, and call on your blogging clique to hop on the bandwagon is disgusting. It's bullying and it's extremely uncomfortable to watch.

This sort of thing really puts me off integrating with people on Twitter and in the blogging world. There are times I dread logging on to Twitter, half expecting to see another row erupting over nothing. I know you might say: 'Unfollow then!', but the problem is that some of these people have an amazing blog that actually adds some value to the community. Aside from the pointless arguments, I want to know what they have to say!

At the end of the day, I'd like it if bloggers just got along and sacked off the negativity. The last thing I want is for this post to be taken the wrong way, taken out of context and have people arguing with me. Equally I don't expect everyone to agree with me, but just think about it next time you see a petty squabble between two bloggers escalating into full-blown trench warfare!

I don't particularly want to argue with anyone, like the rest of the blogging world I have enough going on in my life! I'm more than happy to get into debates about anything and everything but the last thing we all need is negativity flooding your timeline just as you're getting home from work. You just want to chill out, have fun, log on to blogger or Twitter and have a good chin-wag!

I'd also like to point out that in no way is this post aimed at anyone in particular, it's just something that has been playing on my mind after years of observing. Seeing grown women (and men) arguing over silly things on Twitter is something I feel strongly against, particularly when it escalates to bullying. It's not what we got into blogging for.

Save DRAMZ for the theatre

Anyway, enough of that. I recently adopted two female kittens from a Cat Rescue Centre, I was going to take one of my mum's kittens (don't worry my mum didn't give birth to them!) but I was told that these two little girlies had lost their mother shortly after being born and it just broke my heart that they didn't have their mother during such a vital time in their lives. So I took them in, and now they have my 4 year old cat mothering them!

I was a little afraid that having three female felines in the house may result in endless fighting, but I'm happy to report that by the end of day one they were all snuggled up asleep! It was pretty incredible for that to happen as most cats wouldn't be too happy to see two younger females enter their territory, but my Baby G took them under her wing straight away. 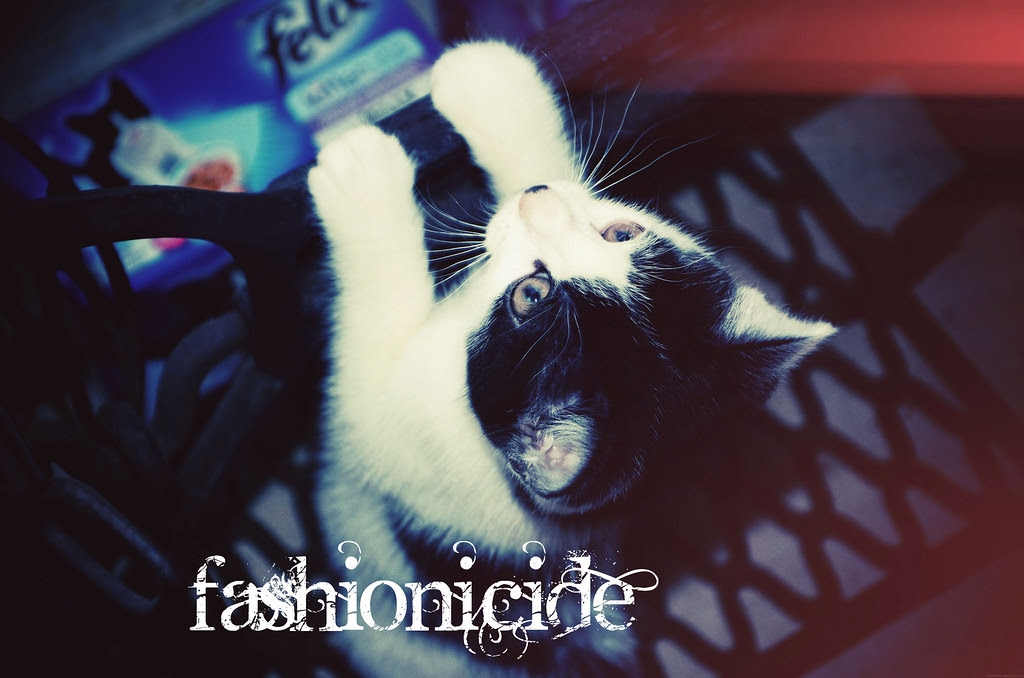 Say hello to my lil' Wilhelmina Slater. Named her after my obsession with Ugly Betty and after she scratched me at the Rescue Centre, ha! 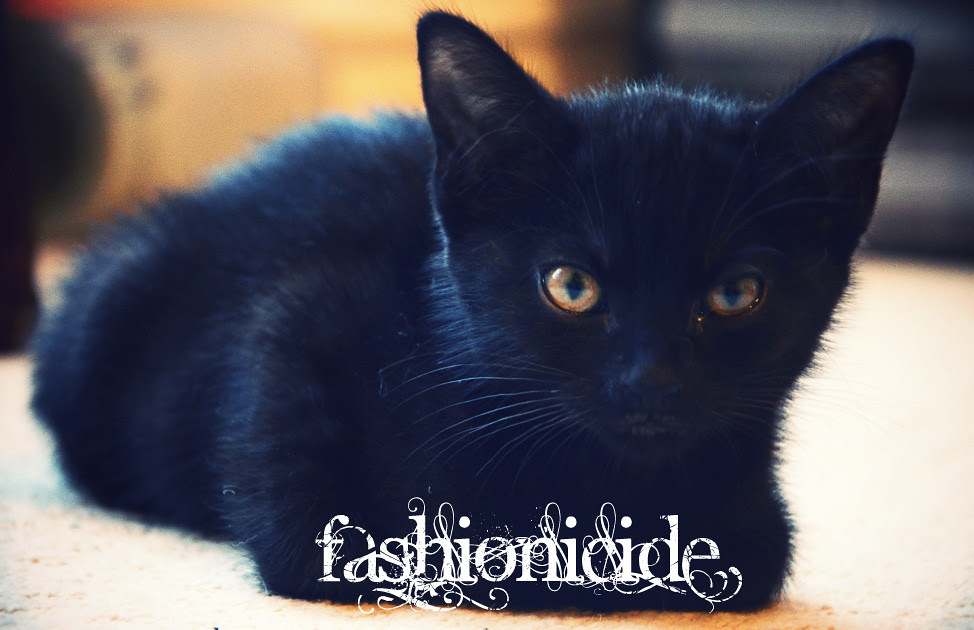 And this is Alisa. Named after one of my favourite songs by the band Cut Copy 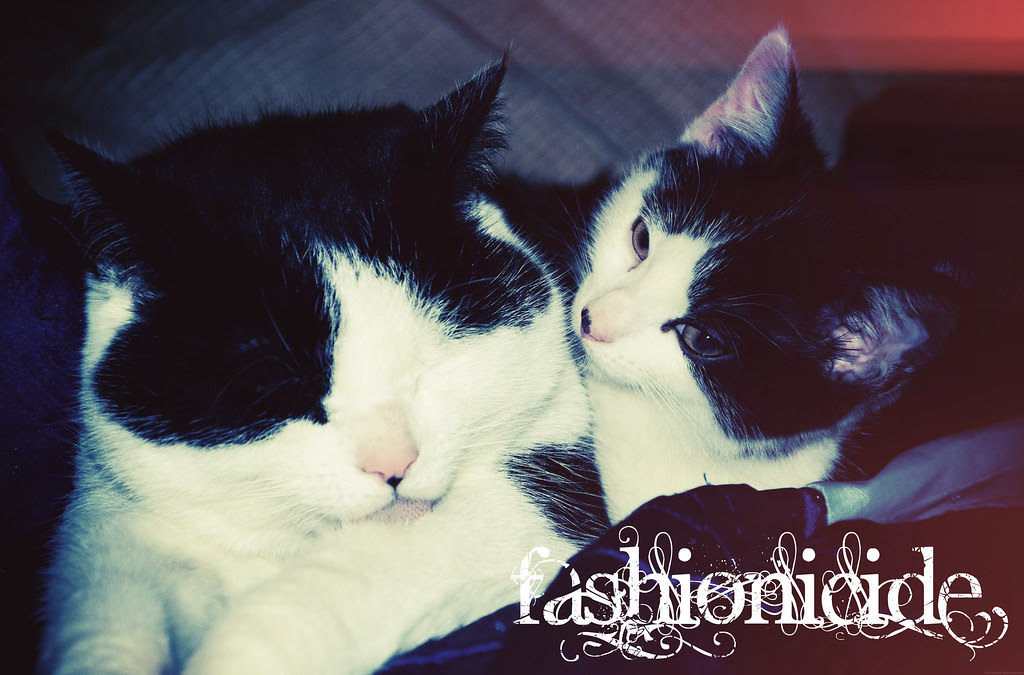 So if my kitties can get along, why can't we?